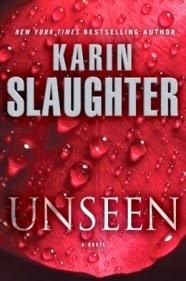 From Goodreads:
Will Trent is a Georgia Bureau of Investigation agent whose latest case has him posing as Bill Black, a scary ex-con who rides a motorcycle around Macon, Georgia, and trails an air of violence wherever he goes. The cover has worked and he has caught the eye of a wiry little drug dealer who thinks he might be a useful ally. But undercover and cut off from the support of the woman he loves, Sara Linton, Will finds his demons catching up with him.

Although she has no idea where Will has gone, or why, Sara herself has come to Macon because of a cop shooting: Her stepson, Jared, has been gunned down in his own home. Sara holds Lena, Jared's wife, responsible: Lena, a detective, has been a magnet for trouble all her life, and Jared's shooting is not the first time someone Sara loved got caught in the crossfire. Furious, Sara finds herself involved in the same case that Will is working without even knowing it, and soon danger is swirling around both of them.

In a novel of fierce intensity, shifting allegiances, and shocking twists, two investigations collide with a conspiracy straddling both sides of the law. Karin Slaughter's latest is both an electrifying thriller and a piercing study of human nature: what happens when good people face the unseen evils in their lives.

My Review:
Yeah, I finally read this book! I think I've had this post in drafts on and off since 2015. Opps. But I've now finally caught up with the series and can finally read new books (well, besides the 2 short stories, but I didn't mean to read them on this blog for so long like this book!) so yeah, I'm happy!

That this book is about Lena and Jared and Will and Sara, yeah, you had to know it was going to be big! And I loved the way that it was told, back and forth between the present and the past, the past chapters going back reverse chronologically, because there were so many big reveals! So awesome!

That Will was undercover working the case that involved Jared being hurt, and Sara didn't know, that was the wrong move, Will! And when she did find out...yeah, that could've broken them as a couple! So glad that it didn't!

This case was all about this big bad guy, Big Whitey, who increased crime and decreased prosecutions. Add in the child and finding out who he was was pretty important, which is a big part of this book. And when we find out who he was, and why Lena and Jared were targeted, made for an excellent ending! Loved it!

I loved this book, and it was just so awesome and great to read!