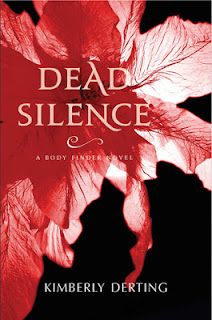 From Goodreads:
Violet thought she'd made peace with her unique ability to sense the echoes of the dead and the imprints that cling to their killers…that is until she acquired an imprint of her own. Forced to carry a reminder of the horrible events of her kidnapping, Violet is more determined than ever to lead a normal life. However, the people who run the special investigative team Violet works for have no intention of letting her go.

When someone close to Violet becomes a suspect in a horrific murder, she finds herself pulled into a deadly hunt for a madman with an army of devoted followers. Violet has survived dangerous situations before, but she quickly discovers that protecting those closest to her is far more difficult than protecting herself.

My Review:
Man, this book was really fantastic! After the ending of The Last Echo, I wondered how this book would go, and yeah, it was just utterly fantastic! I've enjoyed this book so much, and I'm so sad to say goodbye, especially since it feels like there's still stories to tell!

So the fact that Violet now has an echo of her own, well, yeah, that really sucks. There's nothing she can do that can make it go away. And she's going to have to live with that kill or be killed situation for the rest of her life. Which really sucks!

Yes, Violet is in love with Jay (who we haven't seen much over the last two books, unfortunately, but at least they aren't fighting like they did in Desires of the Dead!) But she also has some feeling for Rafe, so I'd really love it if we got a 5th book for her to deal with them!

Such a great ending! Since this probably the end of the series, well, yeah, it wrapped things up pretty well! But now we have to say goodbye to the characters! But I want to spend more time with them, they were so entertaining to read about!

Really enjoyed this book-and this series-but she's writing more books, so I'll have to read those!