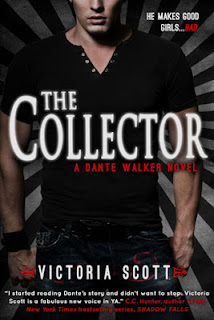 From Goodreads:
He makes good girls...bad.

Dante Walker is flippin' awesome, and he knows it. His good looks, killer charm, and stellar confidence have made him one of hell’s best—a soul collector. His job is simple: weed through humanity and label those round rears with a big red good or bad stamp. Old Saint Nick gets the good guys, and he gets the fun ones. Bag-and-tag.

Sealing souls is nothing personal. Dante's an equal-opportunity collector and doesn't want it any other way. But he'll have to adjust, because Boss Man has given him a new assignment:

Dante doesn't know why Boss Man wants Charlie, nor does he care. This assignment means only one thing to him, and that's a permanent ticket out of hell. But after Dante meets the quirky Nerd Alert chick he's come to collect, he realizes this assignment will test his abilities as a collector…and uncover emotions deeply buried.

My Review:
This was just such a fantastic book! I just wish that I'd read it sooner, because I did get an e-ARC of it from NetGalley, and pretty much the whole point of ARC's is to read the book before it comes out to review it. And I really wanted to read this book!

Dante is quite the character! I just loved reading his voice, it was very strong and fun to read! Because his thoughts, like of Charlie when he first meets her, they're true, but they are pretty harsh. He's the bad guy, he works for the Big Guy Downstairs. And he likes it.

So Dante and Charlie, even after his unflattering thoughts, well, they made for a cute couple! And Dante started to feel conflicted about what he was doing. I really loved how this contrasted with Dante and this thoughts and actions over his past, why he ended up a collector.

Man, that ending! I wasn't expecting that! There were clues, and things that happened that lead up to it, of course, but I didn't connect them in the way that it happened! Just so great, and in the end, I think Dante made the right choice of the good guys!

Such a great book, and one that guarantees that I'll be reading more of this series!