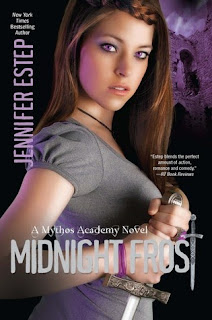 From Goodreads:
Here we go again …

Just when it seems life at Mythos Academy can't get any more dangerous, the Reapers of Chaos manage to prove me wrong. It was just a typical night at the Library of Antiquities — until a Reaper tried to poison me. The good news is I'm still alive and kicking. The bad news is the Reaper poisoned someone else instead.

As Nike's Champion, everyone expects me to lead the charge against the Reapers, even though I'm still hurting over what happened with Spartan warrior Logan Quinn. I've got to get my hands on the antidote fast — otherwise, an innocent person will die. But the only known cure is hidden in some creepy ruins — and the Reapers are sure to be waiting for me there…

My Review:
So this book came in at the perfect time, because the series was getting just a tad repetitive, and with them leaving the North Carolina branch of the Mythos Academy, yeah, that's a pretty big change! And a lot of things happen in this book, it was great!

This is the second last book in the series. Which means that everything is getting closer and closer to the big ending, and pretty much everything in this book is geared to that-the poisoning of Gwen, who isn't the one that ends up poisoned, and the resulting trip to the one place that holds the cure.

So in this book, we get to find out a bit about Gwen's dad's family. Which partially isn't great, seeing as her uncle-and his wife-were reapers. But then there's Rory, her cousin, and Rory's aunt on her mom's side. Really enjoyed getting to meet them, Rory was awesome, what with calling Gwen Princess!

And that ending! Of course there's more Reapers embedded in the Mythos Academies! But they won out in the end, so yeah, that was really great! And there were a few other things, like the bracelet that Gwen got, which will probably be important!

Man, this was a fantastic book, and with that teaser of Killer Frost in the end, yeah, I just want it now!