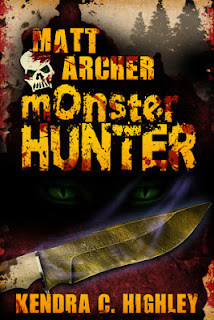 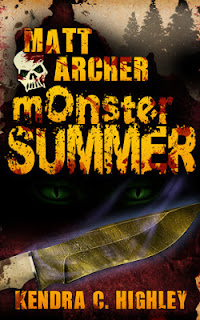 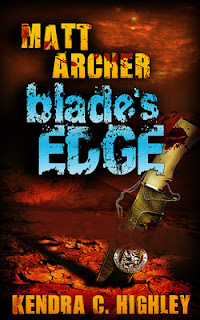 From Goodreads:
In this companion short-story to Matt Archer: Monster Hunter, fifteen-year-old Matt Archer finds himself in the Australian Outback on the trail of his latest targets...and hunting hyper-intelligent, mutated Dingoes is not his idea of a great summer vacation.

From Goodreads:
When Matt Archer was fourteen, he discovered monsters are real. As if that wasn’t enough to go on for a few decades, Matt also found out that he’d been chosen to hunt those monsters--with a sentient, supernatural knife. Now fifteen, Matt has spent the last year working with a clandestine military unit, trying to rid the world of monsters, demons and other vicious creatures, all while keeping it a secret from nearly everyone he knows back home in Billings.

Add in a new girlfriend, family secrets, sibling drama and enough homework to sink an aircraft carrier, and Matt’s life has become more complicated than he ever imagined. Worse, the knife has developed some very definite opinions about Matt’s personal life and it interferes in his business whenever it wants. More and more, Matt’s coming to realize that sharing brain-space with a spirit kind of sucks.

When stories of decimated towns and hordes of zombies start pouring into the Pentagon from Afghanistan, Matt knows he’ll be called up soon. Between the new mission and the knife’s increasing control over his mind, Matt wonders if he’ll survive long enough to take his driver’s exam.

My first review of Matt Archer: Monster Hunter, Matt Archer: Monster Summer, Matt Archer: Blade's Edge
My Review:
Well, I'm going to be reading and reviewing Matt Archer: Legend soon, so of course I had to reread these books in preparation for that! Because this is such a wonderful series, I just had to have the whole thing together, at least, what's out, and what I have access to, as a reviewer for Reading Addictions Blog Tours which Kendra C. Highley has used before, and now!

So yeah, seeing Matt's awkwardness with Ella, when I know he's going to be dating her by the end of Monster Hunter, was just so cute, and that just made me sad, the break up that they had, because Tink was a little voice in her head. But yeah, I have hope for the future!

Loved to hate these monsters, because they could be kinda scary, like the dingoes, who were talking in English, with an Australian accent, that's just wrong, only humans should be really talking on earth, besides voice repeater animals and such like parrots. Monsters that would presumably, to kill us all? Not so much!

There's a lot of pain, and grief in these books, not so much in Monster Hunter, or even Monster Summer, but most definitely in Blade's Edge, and I have a feeling that it'll only get worse, much, much worse, before it gets better!

Loved these books so much, and yeah, I know I'll read them again!