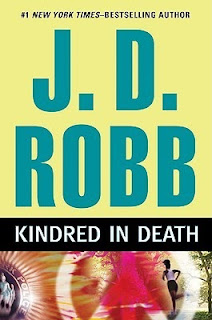 From Goodreads:
When the newly promoted captain of the NYPSD and his wife return a day early from their vacation, they were looking forward to spending time with their bright and vivacious sixteen-year-old daughter who had stayed behind.

Not even their worst nightmares could have prepared them for the crime scene that awaited them instead. Brutally murdered in her bedroom, Deena's body showed signs of trauma that horrified even the toughest of cops; including our own Lieutenant Eve Dallas, who was specifically requested by the captain to investigate.

When the evidence starts to pile up, Dallas and her team think they are about to arrest their perpetrator; little do they know yet that someone has gone to great lengths to tease and taunt them by using a variety of identities. Overconfidence can lead to careless mistakes. But for Dallas, one mistake might be all she needs to bring justice.

My Review:
This was a really fantastic book, though a pretty heart-breaking on. Isn't it every parent's worst nightmare to have their child die before them? And in such a violent, vicious manner? When one of them, the dad, was a cop? Yeah, not fun!

So yeah, this was a really fantastic book, though sometimes hard to read, because the mystery was really great-but the bad guy is just the worst! So yeah, that combo, just gave me chills, it was just something that I needed to read again!

This is the book with Louise and Charles wedding! Finally! It's good to have another wedding in the series, is the first one since Eve and Roarke's, which we didn't actually get to see, either. Since I don't think Mavis and Leonardo have gotten married...

For the bad guy, I almost feel sorry for him. Because with the whole nature/nurture thing, he certainly got the short end of the stick with nurture. But then there's nature, and his own choices, and he made the absolute wrong ones, which is why it's an almost, not an actual sorry.

I enjoyed this book so much, it's just so good, can't wait to continue on with the series!