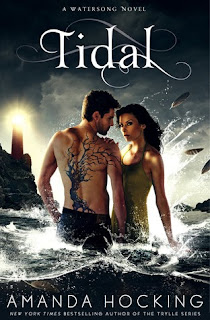 From Goodreads:
With Penn and Lexi determined to kill Gemma and replace her with another siren, Gemma's life is in grave danger...unless she can break the curse before it's too late. With the help of Harper and Daniel, she'll delve deep into her enemies' mythical past--and their darkest secrets. It's her only hope of saving everything she holds dear: her family, her life, and her relationship with Alex--the only guy she's ever loved.

My Review:
I enjoyed this book so much! It's almost the last book in the series, and we're not in for a long wait for the last book, so that's something to celebrate! This book had a lot going on, and I just wanted to read every page, it was just so good!

There was a lot of deals, and scheming in this book. Because of the siren's besides Gemma. Mostly Penn and Lexi, not Thea, really. Thea was mostly in the background as Penn and Lexi fought. But in the end, it was Lexi who was dead, and Penn and Thea who have to deal with that.

I just really enjoyed the romance between Daniel and Harper, they've only been together for a short time, but they work really well together! And I just liked to read it! And it was a counterbalance for the love life of Gemma, after she used her siren song on him!

The one thing that I didn't like, was Gemma's search for the scroll. She only searched the siren's house a few times and then gave up. I know it would be hard to search for a really old mythical scroll, but just searching a house that belongs to the ones the curse is about isn't the only thing you can do!

I really enjoyed this book, and that ending left for a lot of things for the next book! I can't wait!