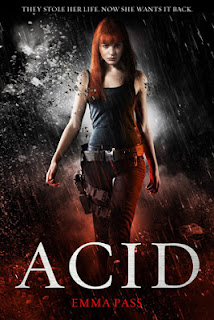 From Goodreads:
2113. In Jenna Strong's world, ACID – the most brutal, controlling police force in history – rule supreme. No throwaway comment or muttered dissent goes unnoticed – or unpunished. And it was ACID agents who locked Jenna away for life, for a bloody crime she struggles to remember.

The only female inmate in a violent high-security prison, Jenna has learned to survive by any means necessary. And when a mysterious rebel group breaks her out, she must use her strength, speed and skill to stay one step ahead of ACID – and to uncover the truth about what really happened on that dark night two years ago.

My Review:
This was a really fantastic book! Jenna is a pretty awesome person to read about, she had to face a lot of difficulties, and change her persona multiple times, but she still got through everything, so that was great!

So this is the future, and with that, differences in culture, and upgrades in technology. So Jenna's face and name change multiple times in this book, as she learns more about everything. Because the changes are pretty big and important, running from group to group!

Really enjoyed both her romance with Max, and that near ending when she broke into the prison. ACID was really bad for those that lived under their control. And that infiltration helped bring about the downfall of ACID!

Oh, and that ending! That hope that things are going to change. But then there's Jacob, and the fact that this book proved that people's faces are capable of change, so basically Jenna is the only one that believes that the guy is Jacob!

Enjoyed this book so much, it was really great, and I want a sequel!