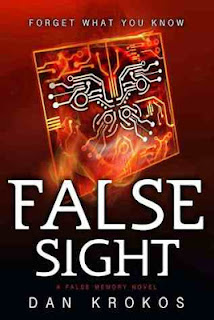 From Goodreads:
All Miranda wants is a normal life. She's determined to move past the horrible truth of her origin as a clone so she can enjoy time with her boyfriend, Peter, and the rest of her friends at school. But Miranda quickly learns that there's no such thing as normal - not for a girl who was raised to be a weapon. When one of her teammates turns rogue, it begins a war that puts the world in jeopardy. Now Miranda must follow her instincts - not her heart - in order to save everything she's fought so hard to keep. with the image of a terrible future seared into her mind, what will she have to sacrifice to protect the people she loves?

Dan Krokos's sequel to the tour de force False Memory is a mind-blowing thriller with high-octane action that will leave readers begging for the final book in this bold and powerful trilogy.

My Review:
I enjoyed this book a lot! Not as much as False Memory, unfortunately, but still a lot! It was a really great book, a great sequel, and now I just really want to read the 3rd and final book! Because man, that ending? I need more!

So the first book, for me, was normal, going into weird. And this book, was trying to be normal, getting into weirder. And that weirder-minus the alternate universes-was really hard to suspend disbelief, and really get into the book. Which sucked, because it was easy in the first book!

We did learn so much about this world in this book, which was really great! So much happens, and things are so weird, and yeah, things got complicated, with the other versions of themselves, and the home world, and yeah, it's not done yet!

Because oh, that ending? That she sacrificed herself, that was pretty scary noble! But thank goodness that they had the backup of her, so they can bring her back! Because there's still more, so of course they're going to need her some more! Really can't wait!

I enjoyed this book so much, though not as much as the first book, and I want the final book as soon as possible!