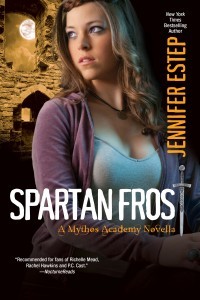 From Goodreads:
I'm Logan Quinn, the deadliest Spartan warrior at Mythos Academy. At least I was — until the day I almost killed Gwen Frost.

Professor Metis and Nickamedes say that I'm fine, that Loki and the Reapers don't have a hold on me anymore, but I can't risk it. I can't risk hurting Gwen again. So I'm leaving Mythos and going somewhere far, far away.

I know Gwen wonders what's happening to me, whether I'm safe. I can't tell her, but this is my story…

My Review:
This was a really fantastic novella! It was really awesome to get in Logan's head, especially after the ending of Crimson Frost! It is short, but it is a novella, and yeah, there are developments that I think will play out in the final two books of the series!

I know that the reason that Gwen is on the cover is because she's been on the cover each time, but I wish that Logan was on the cover this time, because it is his book. And he is a character in this series, obviously! And Gwen is only thought about in this book, not actually physically present!

Logan is a bit of a mess after being controlled by Loki, and stabbing Gwen. Because he loves her, and his body did that-and he couldn't stop it. So he did what any guy would do-he gets as far away from her as he can, to protect her. Yeah. That old trick!

That battle, and what they find there, I can't wait to see how that's all going to play out in the rest of the series! Because it has to be important, because this is the near end of the series, everything is gearing up for the big ending!

Such a great novella, and I just really want Midnight Frost now!