Week 24 Reviews: The Singer of All Songs, The Waterless Sea 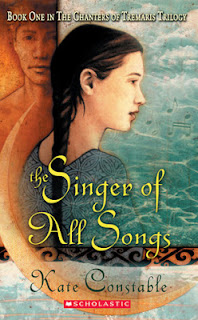 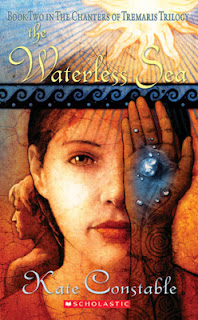 From Goodreads:
Kate Constable's lyrical, acclaimed fantasy debut--now in paperback Calwyn has never been beyond the high ice-wall that guards the sisters of Antaris from the world of Tremaris. She knows only the rounds of her life as a novice ice priestess, tending her bees, singing her ice chantments, and dreaming.

But then Calwyn befriends Darrow, a mysterious Outlander who appears inside the Wall and warns of an approaching danger. To help Darrow, to see the world, and perhaps to save it, Calwyn will leave the safety of the Wall for a journey with a man she barely knows--and an adventure as beautiful and dangerous as the music of chantment itself.

From Goodreads:
The sequel to the critically aclaimed THE SINGER OF ALL SONGS draws readers even deeper into the magical world of Tremaris--and presents a temptation that Calwyn may not be able to overcome...

The second novel in the captivating Chanters of Tremaris Trilogy follows Calwyn and her friends to the desolate Merithuran Empire. As they search for a group of kidnapped children who have the gift of enchantment, they must negotiate the unforgiving desert and the even more treacherous Palace of Cobwebs, where they uncover the dreadful secret that holds the Empire together. Meanwhile, Darrow has broken away from the group to form a new alliance of his own. Can he still be trusted? In this book, Calwyn's quest for peace and justice has greater consequences than she ever could have imagined.

My Review:
So I just loved reading this series again! I loved reading it the first time in Grade 9 when I discovered it (about 2 years before I started blogging) and I knew I loved it, so I wanted to have a review of them, because that meant rereading them, since I hadn't read them since I bought copies of them, since I first read the libraries copies.

I just love these characters! Calwyn, she started off a bit of a dreamer, wanting to see more then just Antaris, and then she does! Oh, boy, she does! Darrow, the one that first faced off against Sanus, and basically was the one that gathered them all together, as the novels went on, but Calwyn was just as much a force as him!

The world that was built here, of the Chanter's powers, and what and how they work, was really cool! And that Calwyn just maybe happens to be the Singer of All Songs, the one that can work all 9 types of magic, well, really makes her special!

Singer brought them together. Waterless brought them apart again. Waterless is when the started spreading out, the characters weren't always together. And yeah, Waterless was just a bit heartbreaking, because of the kids, and the loss of Calwyn's powers, though I know she's going to get them back!

Yeah, these were really fantastic books, and I can't wait for more!

Author: Kate Constable
Series: The Chanters of Tremaris #1, 2,
Read: June 12th, 13th, 2013
Source: Own
Reason Why: I need to reread this series, because it's so freaking good, and they're Sequel Challenge 2013 Books, and Historical Fiction 2013 Books! And The Singer of All Songs is a Reward Challenge Book!
Publisher: Scholastic Paperbacks, Arthur A. Levine Books
Published: September 1st 2002, August 1st 2003

The Singer of All Songs: