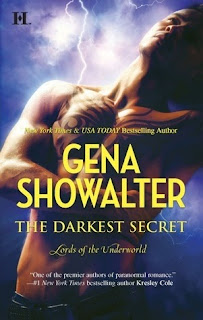 From Goodreads:
In this sexy new installment of Showalter's bestselling Lords of the Underworld series, the haunted Amun meets a woman who tempts him like no other...

Keeper of the demon of Secrets, Amun can manipulate the darkest thoughts of anyone nearby. But when the immortal warrior is chained and isolated to protect those he loves, death is his only hope of release—until he meets Haidee, a fellow prisoner whose beauty and hidden vulnerability draw him into a reckless test of his loyalty.

Haidee is a demon-assassin, raised to despise Amun's kind. Yet how can she hate the man whose touch sets her aflame? But to save him, she must give herself body and soul...and face the wrath of a powerful adversary sworn to destroy her.

My first review of The Darkest Secret
My Review:
This was such a great book! I enjoyed reading it so much, and how connected Haidee is to the series-because in a previous reincarnation, she was the one that killed the only Lord that has been killed by the Hunters, by anyone, period. Yeah.

Oh, to have Amun with Haidee was just awesome! They're supposed to hate each other, but they have a connection which was heading in the opposite direction! So yeah, that was really great! But then there was everything else that was going on!

I love the side scenes in these books that aren't focused on the couple of the book. Because they show what the other characters are doing, and how their lives are going, and in some cases, helps move them along for their upcoming book, which is fantastic!

Loved that ending, what between the piece of Hate, and the piece of Love, well, Haidee is better off, and happy to be Amun, and hopefully won't be reincarnating to that place without her memories any more! Because that'd be great!

I enjoyed this book, it was just so entertaining and good, and I just need to reread more!