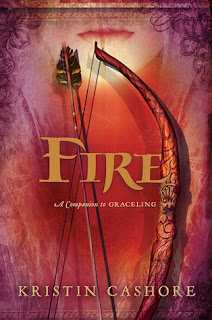 "It did not surprise Fire that the man in the forest shot her. What surprised her was that he shot her by accident. The arrow whacked her square in the arm and threw her sideways against a boulder, which knocked the air out of her. The pain was too great to ignore, but behind it she focused her mind, made it cold and sharp, like a single star in a black winter sky. If he was a cool man, certain in what he was doing, he would be guarded against her, but Fire rarely encountered this type. More often the men who tried to hurt her were angry or arrogant or frightened enough that she could find a crack in the fortress of their thoughts, and ease her way in."-Fire by Kristin Cashore

This is an opening! I need to read more! What about you guys? Happy reading!
Posted by Louisa @ Words I Write Crazy at 6:00 AM