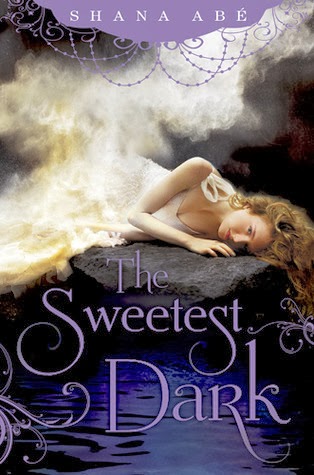 From Goodreads:
The Sweetest Dark is filled with thrilling romance, exciting adventure, and ancient magic. Shana Abé brilliantly captures the drama of post-Victorian England, while unfolding a passionate love story that defies time.

“With every fiber of my being, I yearned to be normal. To glide through my days at Iverson without incident. But I’d have to face the fact that my life was about to unfold in a very, very different way than I’d ever envisioned. Normal would become forever out of reach.”

Lora Jones has always known that she’s different. On the outside, she appears to be an ordinary sixteen-year-old girl. Yet Lora’s been keeping a heartful of secrets: She hears songs that no one else can hear, dreams vividly of smoke and flight, and lives with a mysterious voice inside her that insists she’s far more than what she seems.

England, 1915. Raised in an orphanage in a rough corner of London, Lora quickly learns to hide her unique abilities and avoid attention. Then, much to her surprise, she is selected as the new charity student at Iverson, an elite boarding school on England’s southern coast. Iverson’s eerie, gothic castle is like nothing Lora has ever seen. And the two boys she meets there will open her eyes and forever change her destiny.

Jesse is the school’s groundskeeper—a beautiful boy who recognizes Lora for who and what she truly is. Armand is a darkly handsome and arrogant aristocrat who harbors a few closely guarded secrets of his own. Both hold the answers to her past. One is the key to her future. And both will aim to win her heart. As danger descends upon Iverson, Lora must harness the powers she’s only just begun to understand, or else lose everything she dearly loves.

My Review:
I utterly adored this book! I know there's an adult series that might be connected, but while I haven't read that, I was quite able to read this book, and that left the mystery to be so much more then it could've been if I'd read the other series!

I loved Lora, she's had a hard time in life, keeping her secrets secret, and yeah, that's almost a full time job, but that's just being smart and keeping herself alive! She was snarky, but that was just another wall that she built up, and when someone got through her walls, she would seem like a pretty different person! But she was really strong, though!

Oh, Jesse and Armand! They were both really important characters, because as the synopsis says, both of them are important to learning about the past, and the one that was important the future? We get 2 guesses. because, well, there's only the 2 of them!

Oh, how I loved that ending! It took everything that the whole book was about, and then condensed the pure essence of it into the ending, just wholly dark, intriguing, and had such wonderful romance, and I really enjoyed it!

Loved this book, and I can't wait to read the sequel!