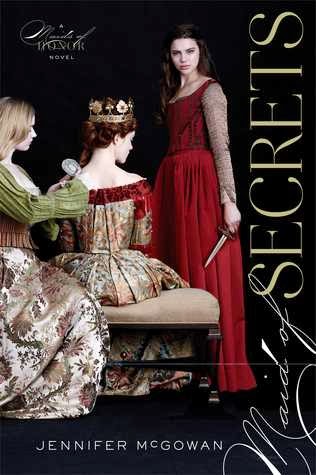 From Goodreads:
Orphan Meg Fellowes makes her living picking pockets—until she steals from the wrong nobleman. Instead of rotting in prison like she expected, she's whisked away to the court of Queen Elizabeth and pressed into royal service, where she joins four other remarkable girls in the Maids of Honor, the Queen's secret society of protectors.

Meg's natural abilities as a spy prove useful in this time of unrest. The Spanish Court is visiting, and with them come devious plots and hidden political motives. As threats to the kingdom begin to mount, Meg can't deny her growing attraction to one of the dashing Spanish courtiers. But it's hard to trust her heart in a place where royal formalities and masked balls hide the truth: Not everyone is who they appear to be. With danger lurking around every corner, can she stay alive—and protect the crown?

My Review:
Loved this book so freaking much! Awesome premise, a thief who decides that working for the Queen instead of staying in prison. So there's that. And the whole secret protection of the Queen-Maids of Honor, yeah, that's an awesome idea!

Loved Meg, because she's a pretty kick ass girl, who's been a thief for a very long time, she knows how to change her appearance, and yeah, those talents apply very well to being a spy, and yeah, deciding to go with being a Maid of Honor is probably one of the best decisions she's made in her life!

Loved all the mystery and intrigue, all the secrets that abound about, what with the Queen having refused an offer of marriage from one guy, and now pretty much every other royal family from other countries want to make an alliance with her, so yeah, it's pretty busy there!

There were 4 other Maids of Honor, initially, aren't very nice to Meg, calling her the rat, and neither are the overseers of the program, and yeah, that wasn't too pleasant. But things did improve as time went on, and they all got to know one another!

All in all, a wonderful book, and I can't wait to read more!