Week 1 Review: All Our Yesterdays 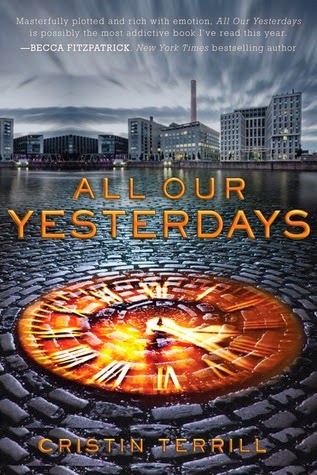 From Goodreads:
"You have to kill him." Imprisoned in the heart of a secret military base, Em has nothing except the voice of the boy in the cell next door and the list of instructions she finds taped inside the drain.

Only Em can complete the final instruction. She’s tried everything to prevent the creation of a time machine that will tear the world apart. She holds the proof: a list she has never seen before, written in her own hand. Each failed attempt in the past has led her to the same terrible present—imprisoned and tortured by a sadistic man called the doctor while war rages outside.

Marina has loved her best friend James since the day he moved next door when they were children. A gorgeous, introverted science prodigy from one of America’s most famous families, James finally seems to be seeing Marina in a new way, too. But on one disastrous night, James’s life crumbles apart, and with it, Marina’s hopes for their future. Now someone is trying to kill him. Marina will protect James, no matter what. Even if it means opening her eyes to a truth so terrible that she may not survive it. At least not as the girl she once was.

My Review:
Oh, what a great book! At first, there's 2 characters, Marina, and Em, and and as you read this book, you realize something-that they're the same person, just from different times, Marina, the now, and Em, the future, and what a horrible future it is!

I loved the back and forth, as we slowly got details that meshed these 2 worlds together, until it was just 1, and seeing different sides to it, seeing it as it is, and seeing how it could, if they don't do anything, turn out after this. And yeah, that was just pretty epic!

I love the mystery for Marina, on who's trying to kill James, while we know that it's Em/future Marina, and Future Finn, while present Marina and present Finn are trying to protect them, and how yeah, Marina falls out of love with James, and in love with Finn, it was nice, sweet, and natural!

And the ending? It was so sad, and that's why I'm so glad that there's going to be a second book, because I want more of this world, and I want these characters to have a happier ending, because the one they currently have, only about half as happy as it should be!

This was such a great book, I don't know what it took me so long to read it, it was just absolutely incredible! Can't wait for the sequel!