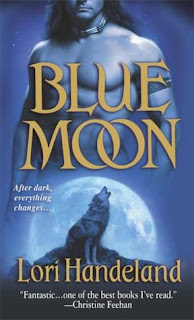 From Goodreads:
Miniwa, Wisconsin is under siege, but not by the usual summer tourists. The area's normally shy wolf population has begun stalking human prey, and their victims have been disappearing...or worse. Something is happening in the woods. Something brutal and primitive...

Officer Jessie McQuade has seen plenty in her years on the force—but nothing as intriguing as the gorgeous, naked man she encounters while tracking a rogue wolf. Professor Will Cadotte is a Native American activist. He's also the only man capable of distracting Jessie from her work. And for a cop, distraction—no matter how pleasurable—can be deadly. It's against Jessie's better judgment to accept Will's help in her investigation, yet she soon finds herself doing exactly that—and more. Will's dark, penetrating eyes see into a part of Jessie's soul she never knew existed. It's exhilarating...and terrifying.

Now, as a town's deepest secrets come to light, no one is safe: not friends, lovers, or strangers. And as Jessie follows a bloody trail to the shocking truth, she'll have to decide who she can trust when the moon is full...

Why the time hasn't come yet...
I have no idea! Just so many books to read, I guess? What about you guys? Happy reading!
Posted by Louisa @ Words I Write Crazy at 6:00 AM