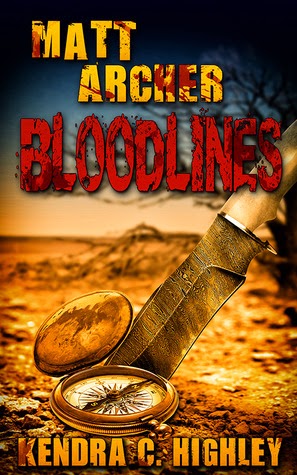 From Goodreads:
When seventeen-year-old Matt Archer set out on his last mission in the Australian Outback, he thought it would be like every other hunt.

After only two days on the ground, his best friend is possessed, a long-lost family member has returned and hidden truths have come to the surface. Add in a coven of witches bent on bringing about the end of the world and, well, this trip has started to suck. Badly.

As his power and strength continue to grow, so does Matt’s concern that he’s becoming more and more like the creatures he’s been charged to hunt: a monster.

Faced with some of his biggest challenges to date, Matt has to decide what he needs to protect most—his family, his team…or himself.

My Review:
While I wish that this book had opened up right after where Legend ended, it did start a few days later, so good enough! And yeah, this book was pretty packed, learning more about the monsters, that there's more bad guys, and yeah, there's a reason why the book is called Bloodlines!

Yeah, there's the whole thing, where the blood of the wielder's ancestors, and how the knives have been waiting until the blood was concentrated, strong enough, to fight the battle against the darkness, and in this book, they get just that further-they learn that Matt will face the ultimate bad guy, and Will will face the Fire prime monster.

And we learn that the battles were circles-one for the bad witch, and one for Mamie. Because Mamie is very important, she's the important good shaman, and yeah, she can do quite a few things, and that's why she get's kidnapped in this book by Bears not helped into this world with the witches.

This is also the book with his dad, and we get to learn more about him, how he's a CIA agent, and how, after being in the darkness for so long, he really doesn't have any emotions, he's more of a robot, and yeah, he doesn't really care about his kids, but he'll use them to get close again with his wife, since they didn't actually divorce. Because she's really the only one that he actually cares about, which sucks for Matt and his siblings!

Loved this book so much, and yeah, I can't wait how it's going to play out, the wielder's program being outed to Congress!