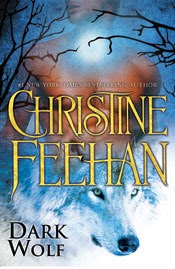 From Goodreads:
#1 New York Times bestselling author Christine Feehan now delivers her most eagerly awaited novel of all — ten years in the making.

In Dark Lycan, Christine Feehan journeyed into the heart of the Carpathians, and into the souls of two lifemates stirred by the flush of passion and the threat of annihilation. In Dark Wolf, the breathtaking story continues as the bonds of family are imperiled, and the fate of two lovers lies hidden in the seductive shadows between life and death.

Skyler Daratrazanoff always recognized the miracle that was Dimitri Tirunul, a man beyond any dream that had ever engaged her nights. But she was human. Vulnerable. He was Carpathian. Nearly immortal. She was nineteen. He was an ancient. Yet she held half his soul, the light to his darkness. Without her, he would not survive. Caught between the two warring species, Dimitri has spent centuries hunting the undead to keep his people free, and humans safe. He had survived honorably when others had chosen to give up their souls. But now, marked for extermination by the Lycans, Dimitri found himself alone, and fearing for his life. But salvation was coming…

No Lycan would ever suspect someone like Skyler to dare mount a secret rescue operation. A teenage girl. A human of untested abilities. But she had something no one else had. She was predestined for Dimitri—as he was for her. And there was nothing stronger for Skyler than her desire to see her life-dream come true. Whatever the risk.

My Review:
Oh, wow, I just loved this book! I've been wanting Skyler and Dimitri's book since Dark Celebration, where they first met in person, and discover that they were lifemates! Because yeah, Skyler, and Dimitri were a great couple, and yeah, they're finally getting their book, which apparently, was 10 years in the making!

One thing that I wish, was that we could've found out more about her mom, because she's a big question mark, and since I'm pretty sure that she's dead, I don't think we'll learn more about her, and I want to, because the little that we got, not enough, I would love to have more!!

Loved how the fact that if the Lycans hurt Skyler, then they'd have a lot of enemies in the Carpathians, from her dad and uncle, Gabriel and Lucien, and Gregori, and her bio dad, Razavan, and his lifemate, Ivory, yeah, those are just some Carpathians that you don't want to get on the wrong side of!!!

This book dug into what life was life for the humans who were family to Carpathians, from Skylar, and Paul, and the young Carpathians, he whose name I've forgotten right now, but is the one that rapped at the Prince, and Joseph? Something like that, and yeah, he was really funny, in the beginning, saying on the death certificate, that he died of a broken heart!

Yeah, I absolutely loved this book, and I can't wait for Dark Blood!