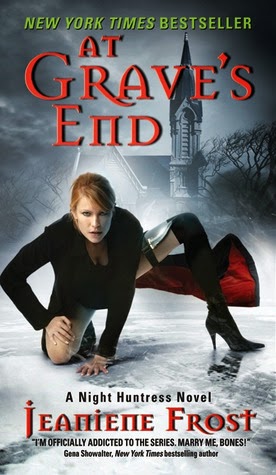 From Goodreads:
It should be the best time of half-vampire Cat Crawfield's life. With her undead lover Bones at her side, she's successfully protected mortals from the rogue undead. But though Cat's worn disguise after disguise to keep her true identity a secret from the brazen bloodsuckers, her cover's finally been blown, placing her in terrible danger.

As if that wasn't enough, a woman from Bones's past is determined to bury him once and for all. Caught in the crosshairs of a vengeful vamp, yet determined to help Bones stop a lethal magic from being unleashed, Cat's about to learn the true meaning of bad blood. And the tricks she’s learned as a special agent won't help her. She will need to fully embrace her vampire instincts in order to save herself—and Bones—from a fate worse than the grave.

My first review of At Grave's End
My Review:
Oh, wow, loved rereading this book! It was just so great, having to fight a new enemy, with the enemy-ish of the previous book, Ian, while learning more about the vampire world, about Mencheres, and meeting Vlad, yeah, this was just a pretty packed book!

I loved all the emotional turmoil in this book, from Denise's husband Randy's death, to when Cat thought that Bones was dead, and then how Vlad had to talk her down from killing herself, to while not really mentioned, but for Mencheres to finally give up on Patra, his wife of 1500 or so years.

Learned more about the vampire world, with  Patra using the black magic that Menchere's taught her, and the ability that Bones inherited, of him to look like he'd been killed, but still be alive, and then go back to normal once he'd fed enough. Yeah.