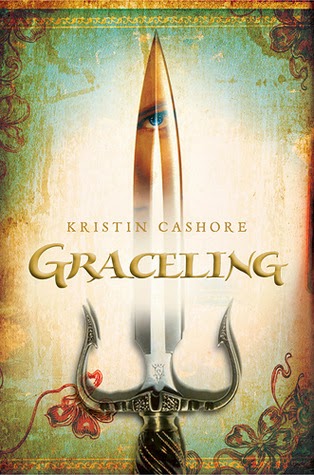 Katsa has been able to kill a man with her bare hands since she was eight--she's a Graceling, one of the rare people in her land born with an extreme skill. As niece of the king, she should be able to live a life of privilege, but Graces as she is with killing, she is forced to work as the king's thug.

When she first meets Prince Po, Graced with combat skills, Katsa has no hint of how her life is about to change.

She never expects to learn a new truth about her own Grace--or about a terrible secret that lies hidden far away...

My Review:
I loved rereading this book! I mean, this world, it's just so fantastical, if very rough around the edges, what with the power-corrupt kings running the place. Thank goodness for the Council that Katsa started, because it's done such wonderful good!

Loved Katsa, how she stood up to her uncle, and how she dealt with her feelings, because Po was keeping the secret of his grace, which he did for a good reason, but that didn't mean that she didn't feel betrayed, as she was getting quite close to him!

And then there was the whole thing with Bitterblue, and how they saved her, but at the cost of Po's eyesight, and eventually, them leaving him behind. And that's how Katsa learned of the true nature of her grace, that she's graced with survival, not killing.

The one scene, where she crosses the space between the 2 mountains? I thought that she dropped everything, positioned Bitterblue, then ran, but I missed the part where she picked everything up again. Not this time, so yeah, it made a lot more sense!

Loved rereading this book, it's just so freaking amazing! Can't wait to reread the rest of the series!