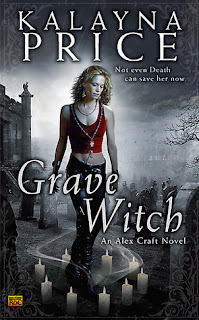 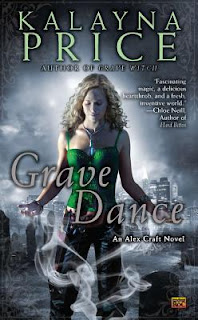 From Goodreads:
Not even death can save her now.
As a grave witch, Alex Craft can speak to the dead-she's even on good terms with Death himself. As a consultant for the police, she's seen a lot of dark magic, but nothing has prepared her for her latest case. When she's raising a "shade" involved in a high profile murder, it attacks her, and then someone makes an attempt on her life. Someone really doesn't want her to know what the dead have to say, and she'll have to work with mysterious homicide detective Falin Andrews to figure out why...

From Goodreads:
After a month of down time, Grave Witch Alex Craft is ready to get back to solving murders by raising the dead. With her love life in turmoil, Alex is eager for the distractions of work. But when her new case forces her to overuse her magic, it might be the last mystery the Grave Witch ever gets to solve...

My Review:
I loved reading these books! I hadn't known about them until Kicking It, and they sounded great, so I started to read them. And devoured them! I would have finished this series if it wasn't for the Kicking It story that was in the middle of what's currently been published!

There were multiple things that I loved about these books and this series! The writing, for one, was flowing and "I need to read the next page, now!" The world, so unique and a great combo of witches, fae, and grim reapers! And that they're investigative mysteries, was just great, as well!

Oh, and the characters! Alex has been through a lot-her brother is missing, so is one of her friends, her mom died, she was basically raised away from the family, and she has a wyrd ability that she has to use, but that it also burns out her sense of sight. Which sucks. And then Falin Andrews, who had secrets. And Death, whom she can touch, and through her, he can have coffee and such. But that's not really his name!

These were only two books. But there was a lot packed into them! Things that were so enjoyable to read all these elements, of mystery, of romance, and of the magic. Oh, and family secrets, of which there are many! They all combined into these addicting stories that I need more of!

I absolutely loved reading these books, they were so fantastic, and I need to read more!