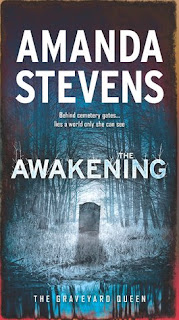 From Goodreads:
Shush…lest she awaken…

My name is Amelia Gray, a cemetery restorer who lives with the dead. An anonymous donor has hired me to restore Woodbine Cemetery, a place where the rich and powerful bury their secrets. Forty years ago, a child disappeared without a trace and now her ghost has awakened, demanding that I find out the truth about her death. Only I know that she was murdered. Only I can bring her killer to justice. But the clues that I follow—a haunting melody and an unnamed baby's grave—lead me to a series of disturbing suspects.

For generations, The Devlins have been members of Charleston's elite. John Devlin once turned his back on the traditions and expectations that came with his birthright, but now he has seemingly accepted his rightful place. His family's secrets make him a questionable ally. When my investigation brings me to the gates of his family's palatial home, I have to wonder if he is about to become my mortal enemy.

My Review:
Yeah, this was an absolutely wonderful book! I've loved this series from the beginning, and now I'm a bit sad to say goodbye! But it's a fantastic ending, and I really enjoyed reading it! Everything just ended very well, and I absolutely loved it!

Of course, there's a graveyard, and there's secrets and creepy happenings! That the powerful would do something like bury their secrets-mistress's and kids with said mistress's-without their names in this graveyard, seems like something they'd actually do. And yeah, that's pretty horrifying!

Things are shaken up in this book. Like, that there's a secret with her adoptive mom's family. Usually it's her birth parents (and her grandfather with whom she grew up with as her adoptive father) but this time, it wasn't Amelia's birth relatives. Ish, since her grandfather is married to her grandmother!

I really enjoyed that ending! We've wanted Devlin and Amelia together for the whole series, and yeah, when they broke up in The Visitor, that sucked! But they got their happy ending! There was a bit of a sad part, and I wish that the ending had been longer, but yeah, it was a fantastic ending!

Loved this book so much, and I can't wait to read whatever Amanda Stevens writes next!