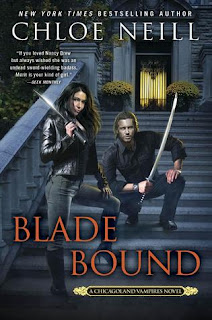 From Goodreads:
The thrilling final installment of Chloe Neill's New York Times bestselling urban fantasy series sees a sinister sorcery advancing across Chicago, and it may usher in the fall of Cadogan House…

Since the night of her brutal attack and unwilling transformation to vampire, Merit’s stood as Sentinel and protector of Chicago's Cadogan House. She's saved the Windy City from the forces of darkness time and again with her liege and lover, Ethan Sullivan, by her side.

When the House is infiltrated and Merit is attacked by a vampire seemingly under the sway of dark magic, Merit and Ethan realize the danger is closer than they could have ever imagined. As a malign sorcery spreads throughout the city, Merit must go to war against supernatural powers beyond her comprehension. It's her last chance to save everything—and everyone—she loves.

My Review:
Wow, I can't believe this is the last book in this series! Yes, there is a spin off (which I just learned because of this review!), more books in this world, but Merit and Ethan's journey is done-they might be in said spin offs, but they won't be the main characters. And that's a bit sad, but they had a hell of a ride, and they deserve a happy ending!

So this book kinda wraps everything up. Like, Ethan's nickname for her! Sure, I did find one thing that I still want to know about, which is Jonas and Margot-I want to know if they fit together! If it was mentioned, I didn't catch it! But yeah, this was a great wrap up to this series!

Of course, there was a lot of good food, and fights! But there was also their wedding, which was really sweet! And there was some unexpected happenings because of the ending of Midnight Marked and the return of Sorcha, so there wasn't a honeymoon right after the wedding. But they could've gone on one after the threat was taken care of!

One thing that I was really looking forward to being in this book, was how Gabriel's prophecy of a child of Merit and Ethan was going to play out. And yeah, it was dealt with throughout this book-Merit's worry about bringing a child into this world, and so much more! Such a great ending!

I absolutely loved this book, and I can't wait to read the spin off series!