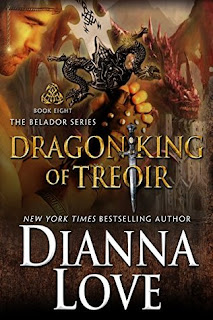 From Goodreads:
New York Times Bestseller Dianna Love's Beladors are back and the surprises keep coming in an action-packed urban fantasy.

The Treoir dragon holds the fate of the Beladors in one hand … and his own in the other.

The Beladors finally have a true leader in Daegan, their new dragon king, but life is far from secure now that they've inherited his enemies. As their Maistir, Vladimir Quinn played a risky role in freeing the dragon from the lair of their enemy, the Medb. Quinn now faces a heavy price for his part. The Medb queen is out for blood. Vigilante killings erupt among Atlanta's secret preternatural community and all fingers point to the Beladors.

The dragon king has his first real test as a ruler when he has to choose between protecting his people and entering a hostile realm full of deities capable of killing a dragon. But as a two-thousand-year-old warrior, Daegan has never shied away from any battle. Quinn, Evalle, Storm and friends race to discover who is trying to turn the entire VIPER coalition against the Beladors before war breaks out.

With the clock also ticking down for Quinn, who has been ordered to hand over Kizira's body to the Medb queen, Daegan reveals an even greater reason to prevent the queen from using necromancy on the body beyond the secrets Quinn protects.

Freedom is never free. Not when the powerful gods and goddesses poised to decide Quinn's fate see an opportunity to also destroy a threat to their existence – the last dragon shifter.

My Review:
Oh, wow, this book was just so fantastic! I've loved this series from the beginning, and it's changed and grown, and yeah, so much happened in this book! I loved reading it so much! And I can't wait for the next book, which I know it going to build upon the rest of this series, and I need it now!

I think this was the first book that didn't focus majorly on Evalle. This book is where Quinn's story really went into gear and yeah, that was really great! And then there was also Daegan, which was wonderful, because we know so little about him!

As always, so much happened in this book! It was like, action, reveal, action, reveal, twist, big huge event! And I loved ever minute of it! It wasn't easy, and yeah, there were a lot of threats, but in the end, the good guys won and have some new information to work with in the future! Though they don't have everything they need quite yet!

That ending was just evil! After a big win, and things seem like they'll settle down-and that big reveal is like, bam! And it was like, oh, no big deal, but yeah, I'm thinking that it's going to be a big part of the next book! Which I'm going to need soon, because I really need more!

Loved this book so much, it was so amazing!