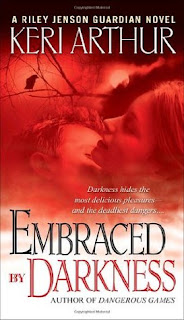 From Goodreads:
She's hunting a killer—
and shattering every boundary—
she's ever known.…

Part vamp, part werewolf, Riley Jenson plays by her own rules, whether it's her stormy love life or her job as a guardian. But when her family's alpha male demands that she solve the mystery of a vanished girl, Riley can feel a trap closing in around her. Because the job comes with a catch: if Riley fails, her own mother will die.

Now the stakes are raised, the hunt is on...and when more women vanish, Riley is caught between a lover who demands that she give up her work, a serial killer who knows no boundaries, and a club where humans and supernaturals mix—at their own peril. Thrust into a realm of seduction and violence unlike any she could have imagined, Riley has to battle to save everything she holds dear. But the ultimate hunt has only just begun...

My Review:
This book was so fantastic to read! In this book, with the threat to her mom hanging over her, Riley has a lot on her plate, her Guardian duties, and the question of going solo with Kellen. But she handles it so well!

Starting 5 weeks into-at the tail end of, her 6 week vacation, Riley gets pushed into the vanished women case by the alpha of the pack that her mother was a part of. And this book, we got a few details about how Riley and Rhoan were treated when they lived with them. And given a reason for Riley's fear of heights!

I think this is the first book that Riley has multiple cases at one time. And she deals with it very well, juggling the clues, the crimes, and solving the mysteries! That somebody would be crazy and evil to do that, when somebody is two different groups, and that is two different things, well, yeah, horrible! But Riley stops all of them!

That ending was hard! And Riley's changed some more. But what those bad guys did, yeah, they needed to be ended! But then there was her relationship with Kellen. And that hurt! My only lingering question is, what was in the letter?

Loved this book so much, and I need to read more!