Week 2 Review: The Girl From Everywhere 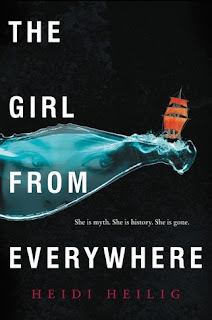 From Goodreads:
Heidi Heilig's debut teen fantasy sweeps from modern-day New York City to nineteenth-century Hawaii to places of myth and legend. Sixteen-year-old Nix has sailed across the globe and through centuries aboard her time-traveling father's ship. But when he gambles with her very existence, it all may be about to end. The Girl from Everywhere, the first of two books, will dazzle readers of Sabaa Tahir, Rae Carson, and Rachel Hartman.

Nix's life began in Honolulu in 1868. Since then she has traveled to mythic Scandinavia, a land from the tales of One Thousand and One Nights, modern-day New York City, and many more places both real and imagined. As long as he has a map, Nix's father can sail his ship, The Temptation, to any place, any time. But now he's uncovered the one map he's always sought—1868 Honolulu, before Nix's mother died in childbirth. Nix's life—her entire existence—is at stake. No one knows what will happen if her father changes the past. It could erase Nix's future, her dreams, her adventures . . . her connection with the charming Persian thief, Kash, who's been part of their crew for two years. If Nix helps her father reunite with the love of his life, it will cost her her own.

In The Girl from Everywhere, Heidi Heilig blends fantasy, history, and a modern sensibility with witty, fast-paced dialogue, breathless adventure, and enchanting romance.

My Review:
I absolutely loved this book! It was different and awesome, and I absolutely loved the world! To be able to go where the map maker believes-and the Navigator believes-is pretty awesome! Though I wouldn't like the lack of plumbing or horrible roles and awful attitudes for women!

Nix was awesome! She's grown up on The Temptation, and the idea that her dad wants to change the past, save her mom-which might mean that Nix might not exist, or that this Nix, with her experiences and live, won't exist anymore. Which sucks. But she still helps him! But she was totally conflicted, and also conflicted in the morality of what they were doing to get the one map!

We went to four places and times in this book-Persia in the 1700's, New York in the present, Hawaii in the 1800's, and China in I forget when, but to an Emperor's tomb. And yeah, that was pretty cool!  Absolutely loved it!

I don't quite get the timing of everything, since there are 3 characters who can Navigate in this book that we know of. But that's mainly because I didn't have all of the dates to bring it all together because my mind doesn't capture such details! And I'm kinda wondering if her mom's pet made it's way to her grandmother when they were at the tomb, because that would make a certain kind of time traveling logic!

This book was fantastic and I can't wait to read more of this wonderful series!