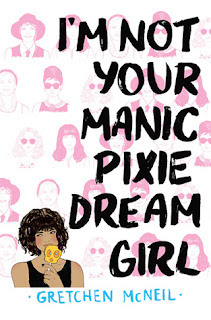 From Goodreads:
From acclaimed author Gretchen McNeil comes her first realistic contemporary romance—perfect for fans of Kody Keplinger's The Duff and Morgan Matson's Since You've Been Gone.

Beatrice Maria Estrella Giovannini has life all figured out. She's starting senior year at the top of her class, she's a shoo-in for a scholarship to M.I.T., and she's got a new boyfriend she's crazy about. The only problem: All through high school Bea and her best friends Spencer and Gabe have been the targets of horrific bullying.

So Bea uses her math skills to come up with The Formula, a 100% mathematically guaranteed path to social happiness in high school. Now Gabe is on his way to becoming Student Body President, and Spencer is finally getting his art noticed. But when her boyfriend Jesse dumps her for Toile, the quirky new girl at school, Bea realizes it's time to use The Formula for herself. She'll be reinvented as the eccentric and lovable Trixie—a quintessential manic pixie dream girl—in order to win Jesse back and beat new-girl Toile at her own game.

Unfortunately, being a manic pixie dream girl isn't all it's cracked up to be, and "Trixie" is causing unexpected consequences for her friends. As The Formula begins to break down, can Bea find a way to reclaim her true identity and fix everything she's messed up? Or will the casualties of her manic pixie experiment go far deeper than she could possibly imagine?

Bea was a fantastic character! She was smart, and she's basically been an adult, or at least, acting like one, for a good portion of her life. She's smart and she loves math, and wants to get into MIT. And yeah, creating a formula to get through high school without any more bullying, is pretty cool! Though it did have its downsides!

Most of these characters felt real to me. The jocks weren't so much, but part of their character was that they didn't have much character, at least, for me! Spencer and Gabe were really awesome, and while I wish they hadn't had the roller coaster of a ride with their friendship with Bea, I'm glad it all worked out in the end!

I really enjoyed reading this book! You know the formula is to help them, but it also has some side effects, and how she went from wanting her boyfriend back to wanting to beat Toile. Yeah. Plus her parent's and their significant others drama, this book was just awesome!

Loved how everything worked out, and just plain loved this book! It was so awesome!