Week 3 Review: Underneath Everything 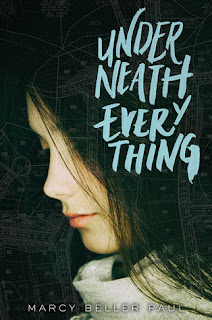 From Goodreads:
Underneath Everything is a seductive, gorgeously written debut about two girls bound by an obsessive and toxic friendship, perfect for fans of Lauren Oliver and Courtney Summers.

Mattie shouldn't be at the bonfire. She should be finding new maps for her collection, hanging out with Kris, and steering clear of almost everyone else, especially Jolene. After all, Mattie and Kris dropped off the social scene the summer after sophomore year for a reason. But now Mattie is a senior, and she's sick of missing things. So here she is. And there's Jolene: Beautiful. Captivating. Just like the stories she wove. Mattie would know—she used to star in them. She and Jolene were best friends. Mattie has the scar on her palm to prove it, and Jolene has everything else, including Hudson.

But when Mattie runs into Hudson and gets a glimpse of what could have been, she decides to take it all back: the boyfriend, the friends, the life she was supposed to live. Problem is, Mattie can't figure out where Jolene's life ends and hers begins. Because there's something Mattie hasn't told anyone: She walked away from Jolene over a year ago, but she never really left.

My Review:
Reading this book was really fantastic! I mean, it told a fantastic story about a girl who used to be popular, but then things happened, and she's spent a lot of time with just one friend. And then this party happen and things take off!

So first off, I want to talk about this cover! Because it was only when I was going to write this review that I really saw the white/gray map designs. I mean, since I read this as an e-book, it's not like I had a lot of chances to look at the cover! And yeah, I really like the map and how it connects to the story!

I really enjoyed watching Mattie with Jolene and Hudson. Both of these relationships were pretty important to her, in different ways. And watching Mattie navigate through her tumultuous emotions was just awe-inspiring!

The ending was really important to this book, more so than usual, for me. Because it's not a happily ever after, and it's a different happy for now. Because she's come free from bad influences and people who weren't good for her, and that was fantastic to read!

I enjoyed this book a whole bunch, it was really revealing and a roller coaster of a ride!