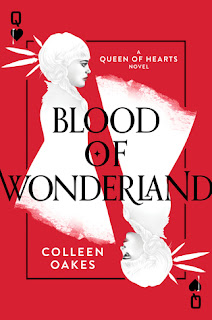 From Goodreads:
Dinah has been exiled from Wonderland. The vicious father she always feared has framed her for the brutal murder of her brother and turned the kingdom against her.

When a chance encounter with one of her father's long-lost enemies brings Dinah more allies than she ever could have imagined, war starts to feel inevitable. But before Dinah can lead her people into combat, she must confront certain truths about her heart and her destiny—no matter how dark those truths may be.

Revolution is rising in Wonderland. Dinah's battle has begun.

My Review:
Yeah, this was a fantastic book! It picks up quickly after the ending of Queen of Wonderland, and yeah, it was awesome to watch Dinah surviving basically all by herself, though that changes pretty quickly! This was a pretty amazing middle book!

Personally, I don't like the word "chance" there in the synopsis. There was nothing chancy about her meetings-it was all orchestrated by someone with vested interest in Dinah's survival. So it's the guy that woke up up in the end of Queen of Wonderland, but in this book, we find out more about him and why he's doing what he's doing! Though I guess you could argue that Dinah didn't know that when it happened, so only found out later!

This is the book where we get answers. We find out more about her mom, and her dad, as well as her world and the other characters that inhabit it. She might have been Princess of Wonderland, but she was sheltered for a lot!

The ending was pretty evil! Dinah's heart was broken, they're heading into war, and Harris is in the Black Towers. So yeah, there's a lot to happen, and I wonder how close to the world that Alice came into, this book will be! I can't wait to see!