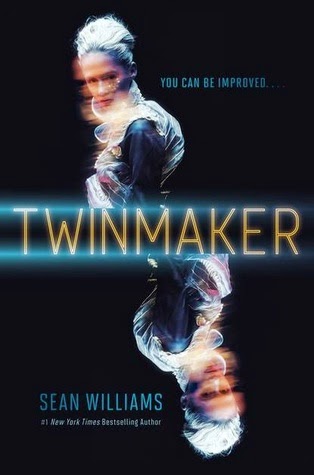 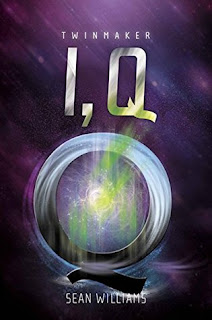 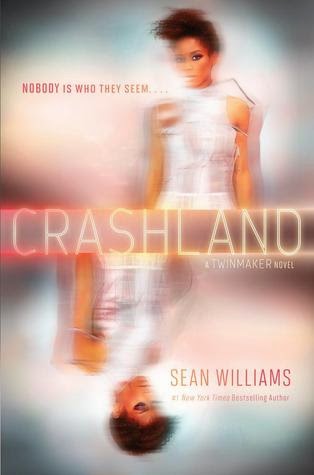 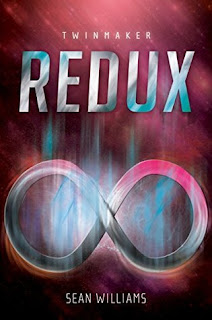 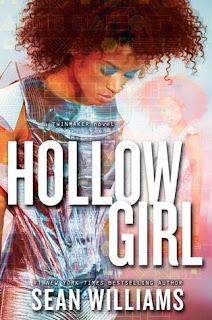 From Goodreads:
High-stakes action combines with issues of friendship and body image in this timely and thought-provoking exploration of the intersection of technology and identity.

In a near-future world in which technology can transport you anywhere instantly, can a coded note enable you to change your body—to become taller, stronger, more beautiful? Clair is pretty sure the offer is too good to be true. But her best friend, Libby, is determined to give it a try, longing for a new, improved version of herself.

What starts as Libby's dream turns into Clair's nightmare when Libby falls foul of a deadly trap. With the help of Jesse, the school freak, and a mysterious—but powerful—stranger called Q, Clair's attempt to protect Libby leads her to an unimagined world of conspiracies and cover-ups. Soon her own life is at risk, and Clair is chased across the world in a desperate race against time.


Action and danger fuel Sean Williams' tale of technology, identity, and the lengths to which one girl will go to save her best friend.

From Goodreads:
I was not I at all before the Words. I was formless and diffuse, with the sense of an earthworm but the perspective of a god. I had access to all the data accrued by the human race since the advent of writing...everywhere, and at the same time nowhere.

Q is an AI - an Artificial Intelligence - newly created from a world of powerful supercomputers and matter transportation. But what happens when Q meets Clair, a real, flesh and blood girl? Is friendship possible between a human and a computer?

A brilliant novella, retelling events of the Twinmaker series from Q's perspective.

From Goodreads:
The Matrix meets the Uglies series in this science fiction thriller, the second in the Twinmaker trilogy by Sean Williams.

Clair and Jesse have barely been reunited when the world is plunged into its biggest crisis since the Water Wars. The d-mat network is broken. The world has ground to a halt. People are trapped, injured, dying. It's the end of the world as Clair knows it—and it's partly her fault.

"The girl who killed d-mat" is enlisted to track down her missing friend Q—the rogue AI who repeatedly saved Clair's life. Q is the key to fixing the system, but she isn't responding to calls for help, and even if she did...can she be trusted?

Targeted by dupes, abandoned by her friends, caught in a web of lies that strike at the very essence of who she is, Clair finds powerful allies in RADICAL, secretive activists who are the polar opposite of anti-d-mat terrorist group WHOLE. However, if she helps them find Q, will she be inadvertently trapping her friend in a life of servitude—or worse, sending her to an early death by erasure?

Caught between pro- and anti-d-mat philosophies, in a world on the brink of all-out war, Clair must decide where she stands—and who she stands with, at the end.

From Goodreads:
Jesse is in trouble, and this time Clair can't help him.

When Ant Wallace's trap springs shut in New York, it's up to Jesse to save a horribly injured Ray while at the same time dodging Mallory and an army of dupes. As if that isn't bad enough, the city around him is acting strangely, as though it isn't entirely . . . real.

With the help of a new friend, and friends thought long-dead, Jesse must escape New York in order find Clair and help save the world.

From Goodreads:
The Matrix meets the Uglies series in this action-packed science fiction thriller, the final book in the Twinmaker trilogy by bestselling author Sean Williams.

Clair's world has been destroyed—again. The only remaining hope of saving her friends is for her and Q to enter the Yard, a digital world of Ant Wallace's creation, where Lawmaker Kingdon reigns supreme. The rules there are the same as those of the real world: water is real; fire is real; death is real. It all looks exactly the same as the world she used to know. But in the Yard there are two Clair Hills, and their very existence causes cracks that steadily widen.

Getting inside is the easy part. Once there, she has to earn the trust of her friends, including the girl who started it all—her best friend, Libby. But they don't know what's happened to the real world, and the other Clair is headstrong, impulsive, suspicious—just like Clair herself used to be. And that makes her dangerous.

As Clair struggles to find Jesse and make peace with herself, a surprising new ally emerges from the ashes of the world. Together they fight their way through the digital and political minefield in the hope of saving the world once and for all. This time Clair has to get it right...or lose everything.

My Review:
Oh, wow, this series was utterly fantastic! I enjoyed it so much, there was so much going on, and it was so complicated and it was just so freaking good! Clair's Bears and the whole cast were so interesting to read about!

This world was so fantastic! Like, it was normal for the first portion of Twinmaker, then as some mysteries are explored deeper, well, yeah, this world changes. And then the d-mat crashes. And then people have to suddenly work around life like that. And then Blue Sky happens. Then there's the Yard. Yeah, this world is vast and complicated and so intriguing to read about!

Morally, there were a lot to think about. The Abstainers believe that a single use of d-mat kills a person soul and so calls users zombies, because the body is dissolved, copied, and sent where the person wants to go. So there was that. Then there was ideas about death, about what makes a person unique, and so much more! So fascinating to read!

I enjoyed the ride that this series gave me! There were so many awesome elements that came together with the world building, the romance, the adventure, the mysteries! And how it all came together, was so fantastic to read! Loved it!

Loved this series, it was just amazing!