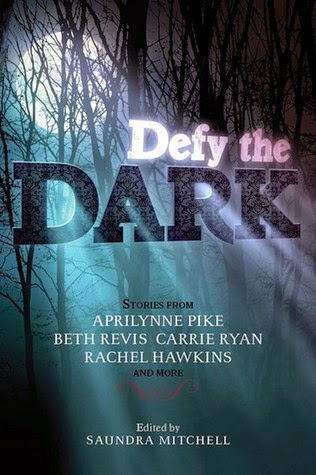 From Goodreads:
It features 16 stories by critically-acclaimed and bestselling YA authors as they explore things that can only happen in the dark. Authors include Sarah Rees Brennan, Rachel Hawkins, Carrie Ryan, Aprilynne Pike, Malinda Lo, Courtney Summers, Beth Revis, Sarah Ockler, and more.

Contemporary, genre, these stories will explore every corner of our world- and so many others. What will be the final story that defies the dark? Who will the author be?

Of the short stories, the ones that I enjoyed the best were the ones by Malinda Lo, Beth Revis and Sarah Rees Brennan, they were all creepy, and really great! I especially loved the way that Malinda Lo told her story, progressively going earlier and earlier in the night. Strange, but awesome!

I just absolutely am amazed, once again, at the diverse genres that YA can fit into! There were supernatural creatures, horror, and contemporary, all within a few pages, and all just so excellent! I loved reading them!

For me, a lot of the stories, had either we survived, so I guess that's it kind of ending, or pretty dark ending! Like Natural, she was thinking that society let them have it, and maybe one day they might be lovers and have kids, but for now, they'll learn in secret? Or Sunflower Something, where the girl's friend is dead, and that's just about it. So for me, this anthology was very dark! Like more so then the title suggests!

Such a fantastic anthology, one that I just love, and yeah, I just enjoyed it so much!