Week 7 Reviews: Love Is A Choice, Across the Universe 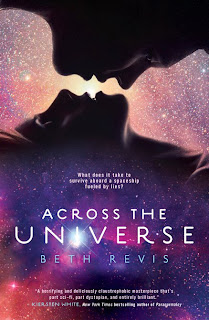 From Goodreads:
The world is gone, destroyed by human, ecological, or supernatural causes. Survivors dodge chemical warfare and cruel gods; they travel the reaches of space and inhabit underground caverns. Their enemies are disease, corrupt corporations, and one another; their resources are few, and their courage is tested.

From Goodreads:
A love out of time. A spaceship built of secrets and murder.

Seventeen-year-old Amy joins her parents as frozen cargo aboard the vast spaceship Godspeed and expects to awaken on a new planet, three hundred years in the future. Never could she have known that her frozen slumber would come to an end fifty years too soon and that she would be thrust into the brave new world of a spaceship that lives by its own rules.

Amy quickly realizes that her awakening was no mere computer malfunction. Someone-one of the few thousand inhabitants of the spaceship-tried to kill her. And if Amy doesn't do something soon, her parents will be next.

Now Amy must race to unlock Godspeed's hidden secrets. But out of her list of murder suspects, there's only one who matters: Elder, the future leader of the ship and the love she could never have seen coming.

My first review of Across the Universe
My Review:
Such a fantastic book and short story! I just loved them both! Getting to spend more time in this world, time that I hadn't before with Love Is A Choice, was just fantastic! I just loved every single page!

So yeah, Love Is A Choice is pretty creepy! Because yeah, it's the Elder before our and Amy's Elder, the Elder that disagreed with Eldest, and subsequently had to fake his death, and then assumed the name Orion. And how he got the position of Researcher, by deciding love is a choice, and he chose not to love the previous Researcher, and replacing her pills with duds.

Amy's fear and nightmares, about her mind and her dreams, and if she'll be unfrozen, and if she is, something will go wrong, they were kinda fantastic, because yeah, they are dreams, and they are strange and weird! But they were fears that could've come true. But they didn't, so yeah!

I remembered a good deal of this book, like the attempted rape, and the fake stars, that Elder was the one that took Amy out. But I'd forgotten a lot, like Harley, which was really sad. Especially since we know that Kayleigh didn't kill herself. And if you've read past this book, know they're already at the planet!

Yeah, I just loved reading every page of these stories-everything was my favourite line!-and I can't wait to reread more, and then reading The Body Electric! I can't wait for that!

Love Is A Choice: