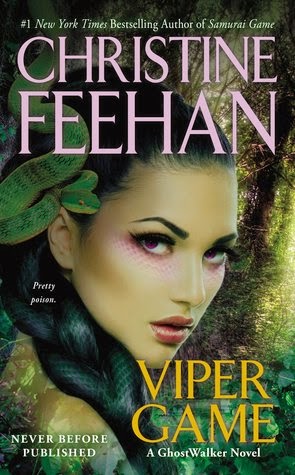 From Goodreads:
Hailed as "the queen of paranormal romance" by J.R. Ward, #1 New York Times bestselling author "Christine Feehan continues to amaze readers" (The Eternal Night) with her phenomenal novels. Now, from the author of the Dark Carpathian series, comes the newest in Christine Feehan's explosive GhostWalker series…

GhostWalker Wyatt Fontenot knows the price he paid for the secret military experiments that gave him his special catlike abilities. After all, he left his bayou home a healer and came back a killer. While Wyatt and his GhostWalker brother Gator may have known exactly the sort of game they were getting into, Wyatt never anticipated where it would lead—or to whom.

The swamps hold many mysteries, but few are as sinuously seductive as Le Poivre de Cayenne. The woman the locals call Pepper is every bit as enigmatic as the three little girls she's desperately trying to protect. From what, Wyatt is soon to discover. Right now Pepper needs a man like Wyatt. Passionately. But her secrets are about to take them both deeper into the bayou than either imagined—where desire is the deadliest poison of all.

My Review:
Oh, this was a really great-and long-awaited-book! I enjoyed it so much, it was really great, plus its the first book for team four, and it stars a Fontenot, which hasn't happened since Night Game!

Wyatt and Pepper were a really great couple, with one big thing-besides her biochemical-that the bad guys used their reproductive DNA to create triplets, without their knowledge or consent! Pepper was already a good mom, but Wyatt caught up pretty quickly!

I enjoyed most of these characters! Wyatt, I didn't really like his cat's possessiveness, which made me glad that I'm not Pepper, but other then that he was pretty good! And, oh, grand mere and the triplets, they were awesome and cute respectfully!

We also got the start of a new couple, who'll probably star in an upcoming book, which is really great! Because we'll probably get the next books without an almost 3 year wait! Plus, they were a pretty great couple!

Favourite lines: "Magnificent meal, Nonny, I'm actually full...for the time being." That's a good thing! "And please don' grab the baby like you're thinkin' and dive out the window. I don' want to be fixin' the damn thing tonight, and Grand-mere would have my hid for scarin' you." Very true! "Well, technically they weren't really vipre's they were elapids, but vipers sounded more...female." Sure, that's a great reason! Also, it's easier to spell! "Of course now that I'm givin' it a little thought ,we'd better buy you a lot. I like rippin' it offa you too.Choices are always good." I don't think that's what she meant! "'Wait until I give the go-ahead and then get to the children. And don' let them bit Trap.' 'Please, don't let them bite Trap,' Trap added" Yeah, of course he wouldn't want to be bit, but this is really funny! "'That's always been your trouble, Zeke. You're a wild car. Anarchy reigns when you're in the mix.' 'I have trouble with authority figures. My profile says so.' 'You had that in your profile? So did I. You should see the things that psychiatrist said about me and authority.' 'Mine says I am the authority." Yes, Wyatt, Zeke, and Trap are very strange! "They're not breathin'. No heartbeat. No pulse. Nothin' at all. That doesn' mean they'll stay that way. They could rise any minute. the new zombie warriors. Maybe it's Braden whose going to be responsible for the zombie apocalypse." Just because they were hard to kill, doesn't mean that they'll become zombies! "Wyatt's right. Braden started the zombie apocalypse." Again, that's killing them, vs. them coming back to zombie life! Different things! But so hilarious!

I enjoyed this book, it was really interesting, new, and I can't wait for more!