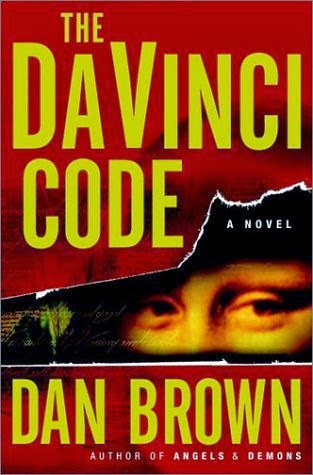 From Goodreads:
An ingenious code hidden in the works of Leonardo da Vinci. A desperate race through the cathedrals and castles of Europe. An astonishing truth concealed for centuries . . . unveiled at last.

While in Paris, Harvard symbologist Robert Langdon is awakened by a phone call in the dead of the night. The elderly curator of the Louvre has been murdered inside the museum, his body covered in baffling symbols. As Langdon and gifted French cryptologist Sophie Neveu sort through the bizarre riddles, they are stunned to discover a trail of clues hidden in the works of Leonardo da Vinci—clues visible for all to see and yet ingeniously disguised by the painter.

Even more startling, the late curator was involved in the Priory of Sion—a secret society whose members included Sir Isaac Newton, Victor Hugo, and Da Vinci—and he guarded a breathtaking historical secret. Unless Langdon and Neveu can decipher the labyrinthine puzzle—while avoiding the faceless adversary who shadows their every move—the explosive, ancient truth will be lost forever.

My Review:
Such a great book! Loved reading it, and then watching the movie, just awesome! Loved making the comparisons, seeing how they're different (like the movie of this comes before the movie of Angels and Demons, but I read and watched in book order!)

So I get why there's a different lady in this book. But I don't get why she would find Robert attractive. And I can understand why there is a 3rd lady in the next one. But I won't like it if his companion in the 4th is a girl, because that's just too much, and just overused!

The whole thing with Mary Magdalene being the wife of Jesus, and mother of their child, and the idea that they could have living descendent now, well, that's pretty cool! I can see that happening! And the whole thing of the modern day bible being created and arranged by a pagen, and the male centric world, well, just proves one thing-that mankind is flawed, and make mistakes, and the bible can't be taken as literal, word for word!

Oh, the ending! I knew that who the Teacher was, but his manipulations were just not nice at all! That he killed his butler like that, and used him that way, not cool! But in the end, he didn't get to find out where the Grail is, so yeah!

Favourite lines: "Symbologists often remarked that France-a country renowned for machismo, womanising, and diminutive insecure leaders like Napoleon and Pepin the Short-could not have chosen a more apt national emblem then a thousand-foot phallus." Probably not! "Congratulations. You have just escaped from the Louvre." Yes, you have-via a soap bar! Awesome! "Indeed. The more penises you have, the higher your rank. Boys will be boys." Well, probably a good deal of them don't know what the symbol means beyond ranking, unless it's part of what they're told or something! "Actually, that depends on how often you dust under your couch." Yeah, it's your fault it it's found! "Robert, you're saying you wrote a manuscript that delves into a secret society, and your editor sent a copy to that secret society?" Sounds a bit silly when you think about it! But it was planned and purposeful for things like this to happen! "Baphomet also appeared in group photographs when some joker raised two fingers behind a friend's head in the V-symbol of horns; certainly few of the pranksters realized their mocking gesture was in fact advertising their victim's robust sperm count." Whenever I do it, it's bunny ears, not horns. One evolved into the other? Strange!

I really enjoyed reading this so much, and now to keep going in the series!