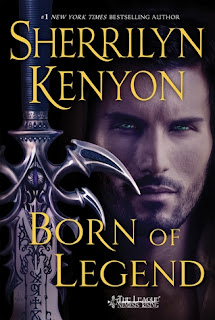 From Goodreads:
"It's official Take a Psycho to Work Day. Why else would I be here?"

Hunted. Hated. Betrayed. Dagger Ixur is on the run for his life. As one of the most recognizable members of his royal house, he has a bounty on his head that guarantees him no quarter from any friend or even family. But surrender isn't in him. He will fight to the bitter end. A resolve that is sorely tested when he narrowly escapes a trap that leaves him severely wounded. With what he believes is his dying breath, he saves a boy born to an extinct race from a group out to enslave the kid for his legendary abilities.

Ushara Altaan has spent her entire life hating those born to nobility. After all, it was a royal house that drove her entire species into virtual extinction. As a rare Andarion Fyreblood, she is sworn to end the existence of any royal she finds. But when Dagger saves her son's life, she is torn between her people and a debt that can never be repaid.

Yet worse than Dagger's family that's still out to end hers, are the League assassins after him who will stop at nothing to claim the lives of her Tavali family. The only hope she has to save them all is to put their future and her faith into the hands of the very enemy whose grandmother personally extinguished Ushara's legendary lineage. But how can she ever trust Dagger when he is a disinherited outlaw whose very name is synonymous with betrayal?

My Review:
I just absolutely loved this book! Of course I loved it, it's a Sherrilyn Kenyon novel, and one the size of Acheron or Styxx. But it was also Jullien's book-now Dagger. Well, he kinda had a lot of names in this book, for safety! Yeah.

There was a lot going on in this book! It also covered a huge time frame, from 4 years after the events of Born of Night, to after Born of Betrayal! Only slightly past Betrayal, but it does have some more events after everyone able to fight goes off to free him!

It was pretty easy to compare this book to Styxx-they were both huge, honking books by the same author, and they both feature twins, the ones who were seen to have had it easy, but didn't actually. And who did some bad things, but some really horrible things were done to them. Yeah.

I have to say, his humor was pretty much top level that it can go. I mean, the way he sees himself, from the way he's been treated, the things he's done. He had a lot of guilt and he used his humor on himself. He healed over the course of this book, though!

Really enjoyed learned more about the Tavali! It's the first book that we've seen it from entry to pretty high up, though we did miss a few inbetween bits, which weren't that too bad to miss. There was a lot in this story, and if there was more, I think some heads would explode!

We also learned more about the Andarion's. First, that they have a whole 'nother religion, and the two groups don't get along very well! And that Jullien and Nyk's grandfather wasn't their grandmother's husband, but a pretty important dude in the Fyreblood bloodlines!

It was hard to read the stories he had about his parents. We saw their good side in Born of Night, and yeah, in this book, we saw their worst. And it wasn't pleasant. But with Ushara, he works through his issues, and that was some great reading!

It was kinda funny, how many events in this series that we've seen, or haven't seen, that Jullien was a part of, one way or another. He was a lot of help, trying to make up for past deeds, and yeah, it just made him a character I had to read more of-he kept changing and growing!

I do think that I need to reread the last 100, 150 pages. I did read that part into the middle of the night, bad me! So I don't think I caught as many details as there were, and I want to know them! Plus the confrontations with his parents, I need to get all the details there!

This was just a really fantastic book, another great book in this series, and I can't wait to read Born of Vengeance, Bastien and Ember's book!