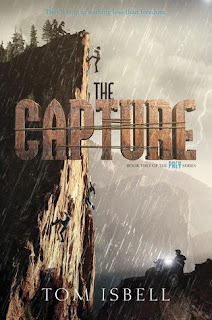 From Goodreads:
This second book in the Prey trilogy is a harrowing story of survival as Book and Hope travel back to the eerie Camp Liberty, where Book was once raised to be hunted for sport, to save those left behind. With new twists, new turns, and a new love triangle, The Capture is a gripping adventure for fans of The Maze Runner.

Every night it was the same: dreaming of those Less Thans shackled in the bunker beneath the tennis court. I couldn't let it go. As bad as the memory was, my dreams only made it worse....

Book, Hope, and Cat cannot live with themselves—they cannot settle into a new free life knowing the rest of their fellow Less Thans and Sisters are still imprisoned. Now the teens must retrace their steps to save the others, destroy the compound, and thwart the evil plans of the Republic.

With new enemies lurking—deranged Crazies and ominous Skull People among them—the group must put their fate in the hands of unexpected allies, including the woman with the long black hair and Miranda, the daughter of the Skull People's Chief Justice, who is drawn to Book. Both may come to their aid, but at what cost? As the teens race toward Camp Liberty, they must ask themselves what they're willing to do to free their friends, for the path back is filled with even more danger as motives are questioned and relationships tested.

My Review:
Yeah, I finally read this book! And maybe, I'll be able to read The Release before it comes out, since I do have a copy. It's just a matter of planning and scheduling and luck! So hopefully! Because this was a really fantastic book, but it ended on the same kind of note as The Prey-the thought of future action!

This book picks up pretty quickly after the ending of The Prey, and things get bad, quickly. And yeah, the way that some of these characters acted wasn't cool. But the secret between Hope and Cat, yeah, I wish that Hope had been able to share because if she had, things would've been better!

Hope makes Book promise not to go into the building where the Sisters were experimented on. And then when he does go into it, the group splits up because the Sisters can't trust him. And it was a little childish. I mean, sure, they lost a lot there and not wanting him to know about it. Still. They could've explained a bit, that there were horrible memories there. Instead, they make him promise in a way that made him really need to know what was going on!

The whole thing with the Skull People was really interesting! And that the lady in Book's memory/dreams, yeah, that was pretty big! And while it was sad to have to leave her behind, well, they still had to save the Less Thans, which they did, which was so great!

Now there's just taking down the bad guys, and I can't wait to read it!