Week 52 Reviews: Under a Spell, Under the Final Moon 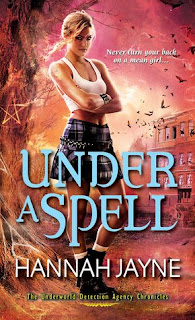 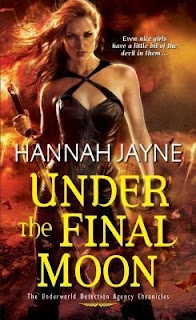 From Goodreads:
Count your blessings, guard your curses—and watch your back…

Sophie Lawson was seriously hoping life at the UDA would get back to relative normal now that her boss Pete Sampson has been reinstated. Unfortunately, her new assignment is sending her undercover into a realm where even the most powerful paranormals fear to tread…her old high school. Being a human immune to magic is no defense against soulless picture-perfect mean girls—or a secret witch coven about to sacrifice a missing female student. And Sophie's Guardian, uber-proper Englishman Will, is determined to convince Sophie he's the kind of temptation she should indulge in permanently. Now, as the clock ticks down to apocalypse, he and Sophie will have to summon every trick in the book to battle devilish illusion, lethal sorcery—and betrayals they'll never see coming…

From Goodreads:
It's not the end of the world--until it is. Sophie Lawson may be a mere human with no special abilities except a strong immunity to magic. But the havoc she's wreaked on the supernaturals who come up against the Underworld Detection Agency have earned her plenty of enemies. Still, a girl can't freak out every time a horribly barbecued corpse is found with her business card in its hand. Or see a sudden glut of earthquakes, wildfires and three-headed dogs as just another day in California. But Alex Grace, her favorite fallen angel, is concerned--or saying he is to see more of her. Getting Sophie to see all the signs of the Apocalypse is an interesting way to heat things up. Or maybe what's making everyone hot under the collar is the fact that all Hell is about to break loose...

My Review:
It was both awesome and sad to finish this series! I mean, it was just so fantastic to read! And yeah, that we're not going to get any more (besides the short story in On the Hunt) it is a sucky fact! I wish that there could've been more in this series!

A lot happens in these books, seeing as they're the end! Like, having to go back to her high school, but this time, as a substitute teacher. Or that her father is coming looking for her. Yeah, some pretty big things were going on!

Sophie has grown from the lady she was in the first book. She still has her problems, but now she has more knowledge and experience under her belt, so she can face these bigger threats! And boy, are they bigger!

It takes more than the ability to shoot what you're aiming for (or at least, hitting them) to beat these bad guys! So it's good that Sophie's worked for this! I just wish that after that ending, that we would get more of a close, but nope, it's like, one wrap up chapter and done. So that was a bit sad! I would've loved just a little bit more book!

Loved this series, it was so fantastic, I just wish it'd lasted longer!

Under a Final Moon: