Week 52 Review: Alien in the House 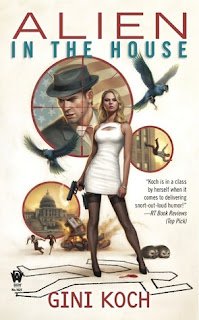 From Goodreads:
Jeff and Kitty Katt-Martini have learned the ins and outs of Washington politics, not to mention how to prevail in intergalactic war and foil dangerous plots. But, in the aftermath of Operation Destruction, the Gower girls' powers are burned out, the entire A-C population has been "outed" as the aliens living on Earth that they are, and, worst of all, ACE is nowhere to be found.

Then murder and mayhem are served up at an important dinner party at the American Centaurion Embassy, and when the dust settles Alpha Team and the Diplomatic Corps have more problems than just a dead Congressman.

Is there a single criminal mastermind—or multiple enemies—behind all the conspiracies that want Kitty dead and the A-Cs gone or co-opted to become the War Division?

The return of the best assassins in the business, the reappearance of two individuals long-presumed dead, Agent Malcolm Buchanan felled by something no one can identify or cure, and new technology that can block even the most powerful empath on Earth … all of this means the game's officially afoot.


It's up to Kitty and the rest of the gang to find out what's really going on and why. But will they be able to stop the killer or killers before the rest of the U.S. House of Representatives become casualties? And will the replacement Representative for New Mexico's 2nd District, who happens to be Jeff Martini, be the next to die?

My Review:
This book was so fantastic! Which is no surprise, this series has always been the best since the beginning! And yeah, it keeps getting longer and more complicated! I confess that I had a hard time keeping track of some of the minor characters even if, well, probably because, they were just introduced, or if we haven't really seen them since Alien Diplomacy!

Of course there was so much going on! I was about 150 pages in the ebook, and things had barely started, but in terms of this series, that just means that it was a lot of random events that they have to piece together! So great!

Also, this book takes about a year after Alien Proliferation, and they're going to, and they do, celebrate Jamie's birthday! But they also had to deal with ACE being missing, a killed representative that was bigger than just one, a device that blocks Jeff from reading the immediate area, the revelation of the Mastermind, and so much more! I absolutely loved it!

This book was freaking huge! I think my favourite part has to be tied between the pink ballroom and Chuckie and Naomi's wedding! Jamie was just so freaking cute, and I wonder if she'll get a wedding connected with her birthday celebration each year like Kitty wonders if Jamie wants! Given the romance of these guys, I think it could be highly likely that there'll be plenty more weddings in the future!

This book was absolutely fantastic, and I am going to finish what's been published of this series before the new year!