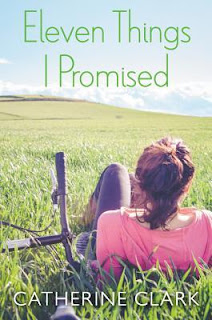 From Goodreads:
Catherine Clark has crafted a poignant story about the distances one girl is willing to go in the name of friendship that is at once funny, heartbreaking, and utterly romantic.

Seventeen-year-old Frances wouldn't describe herself as adventurous. Until now . . .

Frances has one week—while she'll be away from home competing in a high school bike race—to do every single thing on the Fix-It List. Ten crazy, totally out-of-character ideas her best friend, Stella, came up with to make the bike ride unforgettable. However, as each item on the F-It List opens Frances up to new adventures, new friends, and possibly even a new romance, it becomes increasingly difficult for Frances to keep the one promise that she knows she absolutely must obey—her promise to not tell anyone the truth about the accident that left Stella broken and angry, and started Frances on her quest to complete the list.

My Review:
I loved reading this book! I'm not a biker, but my dad is, he's done 1000 km rides. So yeah, it was great to read this book! And it was a pretty emotional book, what with Stella's accident and then Frances trying to complete Stella's Fix-It List. Yeah.

We got the day that the accident happened, and then we jumped to heading of for the race. And yeah, that was good to read, because watching Stella go through what we learned that she did do, later in the book, wouldn't just heart-breaking!

I loved how Frances had this push-pull connection with the rest of her team. She wasn't as serious about biking as the rest of them, at least before the accident. And then she was also trying to carry out the items on the list. And yeah, that caused some problems that were so great to read!

It wasn't until near the end that the truth came out. Of course, there were hints that things weren't right, we knew about the accident, but we didn't know how bad it was. And it was pretty bad! It was something that would change her life forever. Yeah.

This book was utterly fantastic, and I loved reading it!