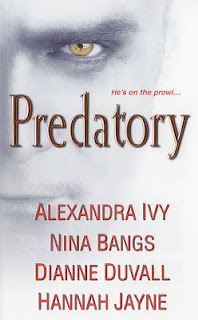 From Goodreads:
Four of today's most exciting paranormal authors take readers into the thrilling realm of vampires, immortals, and other supernatural beings with a thirst for illicit desire...

Out Of Control by Alexandra Ivy
Ph.D student Angela Locke has a crush on her sexy professor, Dr. Nikolo Bartrev. When she learns he's actually a Sentinel with extraordinary powers, she joins forces with him to catch a psychopath. But soon, their hottest pursuit is of each other...

Ties That Bind by Nina Bangs
Cassie Tyler agrees to sub for her friend at the funeral home where she works. But she gets more than she bargained for when a group of men attack her and a vampire comes to her rescue. . .

In Still Darkness by Dianne Duvall
Immortal Richart d'Alençon can't forget the woman who rewarded him with a sensuous kiss after he saved her from a trio of vampires. While Richart knows that loving a human can only bring trouble, the taste of forbidden lust is too great to resist. . .

High Stakes by Hannah Jayne
When vampire fashionista Nina LaShay's design contest rival is found dead, she's the prime suspect. Sexy photographer Pike is number two. He's the kind of man who makes Nina salivate. But will she have to reveal herself to have him--and to save them both? Or does Pike have a secret of his own?​

My Review:
I absolutely loved reading this anthology! Thanks to Underworld Detection Agency series, I now have 2 new favourite authors, so yeah, that's awesome! This short stories were so fantastic to read and I loved reading them!

Out of Control is the first story in the Sentinels series, and it was a great look, this world was really fantastic! I can't wait to dive more fully into it with Born in Blood and Blood Assassin! Loved the characters, and how they beat the bad guy! So awesome!

Ties that Bind, honestly, I would love it if it became a series! Unless it already is, and just didn't mention that on the Goodreads page. Because the world was so well developed for an anthology short story! I loved the details, and things were left open ending, because the known bad guys were taken down, but there was the shadowy controller character out there still!

In Still Darkness was a fantastic story! We've gotten into Immortal Guardians a bit by the time this story is set, and yeah, it was great to have more time in the world! I really enjoyed watching these characters get their happy ending!

High Stakes was hilarious! I absolutely loved reading about Nina, and that she was having these troubles in the fashion world, well, she's been equipped to handle situations like this in the series! It was so wonderful to read! I can't wait to read more of the series!

This anthology was just amazing, filled with wonderful stories written by amazing authors! Loved it!