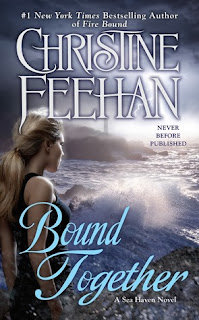 From Goodreads:
The Sea Haven series comes to a climactic end as the mysterious man from Blythe Daniels' past re-enters her life in a dramatic way. Viktor Prakenskii had always intended to come for Blythe after his work undercover was at an end, but with a dangerous enemy heading towards Sea Haven, he knows he cannot wait any longer or he will jeopardize the woman he loves. His arrival sets off an explosive chain of events, and everyone in the small community of Sea Haven, including the Drake family, will never be the same.

My Review:
I just loved reading this book! It's the last book in the Sisters of the Heart series, but not the last book in the overall Sea Haven world-there's going to be another spin off series, the Torpedo Ink(s?) and yeah, that's so great, because we were introduced to about half of their members in this book!

We were told of Viktor and Blythe's relationship in Fire Bound, but yeah, there's nothing like getting the story first hand from these characters themselves! And yeah, things were pretty unexpected! Like, we knew there was a reason why Blythe was at the same counselling group as the others, but yeah, the reasons why, unexpected! Especially the reason, the who, behind them!

Viktor had the worst childhood of all his brothers. Well, birth brothers. His chosen family had about the same childhood because they grew up in the same school. The worst of the worst. And yeah, I guess it was fitting that they would take down pedophiles like the ones that hurt them!

This book ended on a really great note, happiness and connections, and healed hurts, and hope for the future! And that there's 17 other members of the Torpedo Ink (which does not make all of them tattoo artists as I saw somewhere, though they all do have tattoos!) and two of them are girls! And hopefully they'll all get stories! That would be so awesome, even if some of them where short stories, or there were two couples in a book like Dark Promise!

Yeah. This book was so great, and I can't wait for Shadow Reaper next from Christine Feehan!

Author: Christine Feehan
Series: Sisters of the Heart #6
Read: December 9th, 2016
Source: NetGalley
Reason Why: Love her books and writing, and this series, so much! And it's a End of Series 2016 Book, Prequel & Sequel Challenge 2016 Book and a WoW Book!
Publisher: Jove
Expected Publication: March 21st 2017