Week 51 Review: How to Win at High School 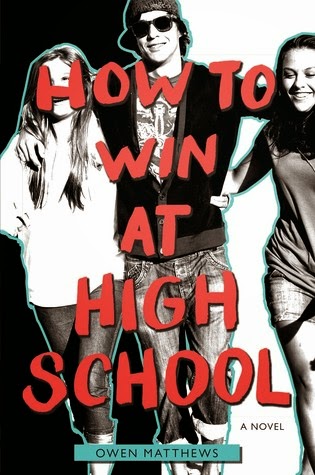 From Goodreads:
Using Scarface as his guide to life, Adam Higgs is going from zero to high school hero.

Adam Higgs is a loser, and he's not okay with it.

But starting as a junior in a new high school seems like exactly the right time to change things. He brainstorms with his best friend, Brian: What will it take for him to take over Nixon Collegiate?

Adam searches for the A-listers' weak spot and strikes gold when he gets queen bee Sara Bryant to pay him for doing her physics homework. One part nerd, two parts badass, Adam ditches his legit job and turns to full-time cheating. His clients? All the Nixon Collegiate gods and goddesses.

But soon his homework business becomes a booze business, which becomes a fake ID business. Adam's popularity soars as he unlocks high school achievements left and right, from his first kiss to his first rebound hookup. But something else is haunting him—a dark memory from his past, driving him to keep climbing. What is it? And will he go too far?

How to Win at High School's honest portrayal of high school hierarchy is paired with an adrenaline-charged narrative and an over-the-top story line, creating a book that will appeal to guys, girls, and reluctant readers of every stripe. Adam's rocket ride to the top of the social order and subsequent flameout is both emotionally resonant and laugh-out-loud funny.

My Review:
Yeah, this was a really fantastic book! But you know that things aren't going to end well. And by things, I mean his business and popularity. But you know, in the gaining of that, he lost something, that he didn't really regain until everything he was working for came falling down!

So I think that this is Owen Matthews' writing style, since he did it here and in his second book, where there's short chapters to tell the story. Which means a lot of pages. But yeah, it works, and I really enjoy it!

This was a really great look at high school. Those kids, the popular ones, the gods and goddesses, yeah. And the desire to not be a loser, to be one of the popular kids. And you wanted to root for Adam, but knowing that what he was doing was wrong, and it was hurting him!

You could almost call this a warning book, like a guide of what not to do. But it's more than that, which is the almost. Because there's his family, and the warnings, and the beating up. And yeah, it's not a book with the happily ever endings, but one with a solid reasoning and going into life from a better place.

This book was weird and awesome, and I really enjoyed reading it!