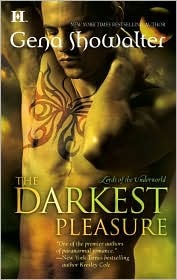 From Goodreads:
Reyes is a man possessed. Bound by the demon of pain, he is forbidden to know pleasure. Yet he craves a mortal woman, Danika Ford, more than breath and will do anything to claim her--even defy the gods.

Danika is on the run. For months she's eluded the Lords of the Underworld, immortal warriors who won't rest until she and her family have been destroyed. But her dreams are haunted by Reyes, the warrior whose searing touch she can't forget. Yet a future together could mean death to all they both hold dear...

My Review:
This was such a great book! Loved reading it again, it had lots of great developments in this world-they have 2 artifacts, just 2 left to go! And this is the book about Danika and Reyes, so yeah, it was really excellent to read about them!

Yeah, they do have a few issues, like the fact that they met because her family was kidnapped because Aeron was charged with killing them, but he resisted, and yeah, they didn't die. So that's a positive. The negative is now that Danika wants to kill all the Lords.

And yeah, Reyes and Danika have a bit of a strange relationship because of his demon, and the deal they had to make with Cronus, but they're happy together, so yeah, watching them in this book was just the best!

This is the book where we meet Gilly, which is really great! Because of the thing that's going to slowly develop between her and William, waiting for her to be of legal age. Though there's the complications with his book, and everything there. But this is the start of that!

Such a great book, and I just need to have this series!

Author: Gena Showalter
Series: Lords of the Underworld #3
Read: May 27th, 2013
Source: Own
Reason Why: Must reread, and it's a Sequel Challenge 2013 Book!
Publisher: HQN
Published: January 1st 2008