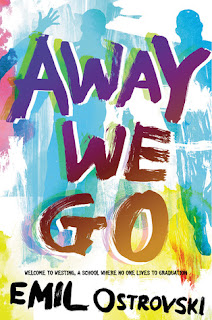 From Goodreads:
With an innovative format that includes interstitial documents, such as flyers, postcards, and handwritten notes, Away We Go is an often funny, honest look at the struggles of first love and tragic heartbreak that will resonate with fans of the critically acclaimed Grasshopper Jungle, by Andrew Smith, and Noggin, by John Corey Whaley.

Westing is not your typical school. For starters, you have to have one very important quality in order to be admitted—you have to be dying. Every student at Westing has been diagnosed with PPV, or the Peter Pan Virus, and no one is expected to live to graduation. What do you do when you go to a high school where no one has a future or any clue how to find meaning in their remaining days?

My Review:
This was a really fantastic book! What the synopsis doesn't tell you, is the meteor, or Polo club. Or that it alternated what when was happening-one year ago, seven weeks till, 6 months ago. Just so fantastic (and the slightest bit confusing) to read!

For me, this book was really enjoyable. It's just not one that I'm going to read again. It was really awesome, but like it says, it deals with first love and heartbreak in a honest way. And the fact that the kids are dying at the school. Oh, and the meteor that has a 1 in 1000 chance of hitting Earth and wiping humans off the map. And I can't read it again. Once was enough!

There were two big questions. What caused PPV, and what happens after they get to tertiary care. There are a whole bunch of theories that are really creative. But the main thing was, for the second question, is the fear that they don't know what's going to happen.

I loved Noah. He's gay, but he has a girlfriend, and there's the guy who he loves and all the complications there. His friends call him a troll, and the way his mind works, the witty comebacks, it was just so enjoyable and yet heart-hurting to read about him and his friends!

Yeah, this book was so fantastic, I just can't go through that wringer again!