Week 12 Review: Into the Dim 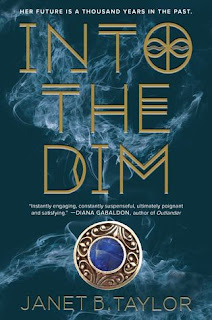 From Goodreads:
When fragile, sixteen-year-old Hope Walton loses her mom to an earthquake overseas, her secluded world crumbles. Agreeing to spend the summer in Scotland, Hope discovers that her mother was more than a brilliant academic, but also a member of a secret society of time travelers. Trapped in the twelfth century in the age of Eleanor of Aquitaine, Hope has seventy-two hours to rescue her mother and get back to their own time. Along the way, her path collides with that of a mysterious boy who could be vital to her mission . . . or the key to Hope's undoing.

Addictive, romantic, and rich with historical detail, Into the Dim is an Outlander for teens.

My Review:
I really enjoyed reading this book! I'd read some reviews before I started, and they were a pretty even mix of good and bad. And since I'm me, and it's like I can't find a YA book that I don't love, well, I'm on the positive side!

To to say that there weren't negatives, there were. But they were smaller the the positives, which is always a great thing! It was more little annoyances, that she didn't know that she was pretty, she was the basically the only one who could do this, and things like that. Not really big deals!

Loved this world, and how it works! The time travel was really awesome, and I just enjoyed how it all worked. It's not fully understood, but they were able to utilize it, which is about 20% of the way, at least!

It was really awesome to read this book soon after reading the Scarlet series, because they both feature Eleanor of Aquitaine, though in different periods of her life. This book took place while she was pregnant with her second child with Henry, and it was so fascinating!

Loved all the twists and turns! There was something going on with her adoption, and her memory of the nightmare tree. And when the truth came out, that meant something! Just so enjoyable to read, to what what was happening!

Loved reading this book, it was so fascinating, and I can't wait to read more of this series! Especially after that ending!