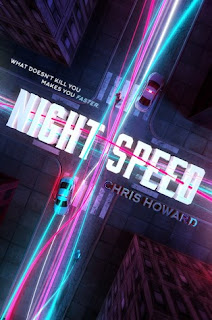 From Goodreads:
Only those young enough can survive the pulse-pounding rush of tetra, a dangerous and addictive new drug that fuels a nine-minute burst of superhuman strength and speed. Alana West has been trained to use the drug so she can pursue the young criminals who abuse its power—criminals like the breakneck who nearly killed her kid brother.

On tetra, Alana is unstoppable. The rush makes her an explosive blur as she surges through New York City, battling to bring down breaknecks before they leave more people dead or injured in their wake. But with the clock ticking down to her eighteenth birthday, Alana will soon be too old for the rush...when just one more dose will prove deadly.

Supported only by her strong and steady handler, Tucker, Alana goes undercover, infiltrating an elite gang of breaknecks to stop the supply of their drug. But when Alana gets trapped on the wrong side of the law, she learns the breaknecks are not quite what they seem—especially Ethan, the artistic boy whose bottomless brown eyes seem to see the truth inside her. With her own dependency on tetra increasing, Alana must decide where her loyalties lie before the rush ends. Forever.

My Review:
This book was so fascinating! I loved the world, and how the tetra works. It was pretty cruel, really, but I just couldn't stop reading! Like, I was about 100 pages in before I had to go to sleep. And then other 200 pages just flew right on by!

I just have to say, I love the colour! I'm pretty sure that it's a mix of 4th dimension, and how fast they can go when they're on tetra! The colours are so pretty, and it's just really nice to look at this cover! Everything just works so well together!

To have 9 minutes of being faster, stronger then other people-before you're 18. And that it can kill you. And then derailing. And at the end, the needling, and either detox or death. Yeah, that's a pretty mixed bag of effects!

There were a lot of ups and downs in this book! Mostly downs, and twists, and surprises, but there was a pretty great ending! Well, after the pain and all. Like, who the breakneck who hurt her brother was. And who was dealing the blackmarket tetra, and why!

Loved this book, it was so great and enjoyable! Can't wait to read more by Chris Howard!