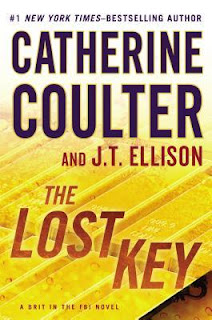 Freshly minted FBI agent Nicholas Drummond is barely out of his Quantico training when he and his partner, Mike Caine, are called to investigate a stabbing on Wall Street.

Their investigation, however, yields more questions than answers. It quickly becomes clear that the victim, John Pearce, was more than the naval historian and antiquities dealer he appeared to be. What Drummond doesn’t know is that buying and selling rare books was Pearce’s cover, and that he had devoted his life to discovering the whereabouts of a missing World War I U-boat concealing a stash of gold bullion, and an unexpected surprise that only raises more questions. When Drummond and Caine find both of Pearce’s adult children have disappeared, the case assumes a new sense of urgency. The FBI agents know their best lead lies in the victim’s cryptic final words—“The key is in the lock.” But what key? What lock?

The search for Adam and Sophia Pearce takes them on an international manhunt, which threatens to run them afoul of an eccentric billionaire industrialist with his own plans not only for the lost gold, but the creation of a weapon unlike anything the world has ever seen.

Why the time hasn't come yet...
It took me so long to get around to reading the first book. But I want to read it! What about you guys? Happy reading!
Posted by Louisa @ Words I Write Crazy at 6:00 AM