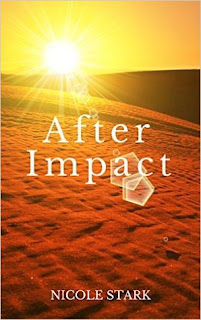 From Goodreads:
Avalon wakes up from a 100 year old cryosleep in a new habitat with few memories and lots of questions. At first, HOPE (Humanity's One Plan for Escape) habitat appears to be a well-oiled machine, preparing 5,000 carefully chosen inhabitants for a new Earth. However, a medical assistant named Ilium reveals that certain members of the habitat have been falling ill from a mysterious virus they were inoculated against. Soon, HOPE habitat's tranquil illusion is shattered as Avalon plays a perplexing message left by her father. If Avalon is to survive this dangerous new environment, she will have to find the strength to navigate a habitat enveloped in secrets.

My Review:
I enjoyed this book a lot! It was so great, so enjoyable, and really interesting to read! There were a few parts to this book. Like the fact that it's a dystopia book-there's only 5000 of them. And a bit of romance. And then the mystery of what was going on with the illnesses!

I had one small, tiny complaint. And that was the fact that the words used were a little different then what real teens speak like. And these were mostly teenagers. So it did sound a bit off, but only a tiny bit, and it was still enjoyable to read!

The idea of HOPE, of going underground to survive, and then coming out later, it's not a new idea-City of Ember. But how it was executed, that was what made this book great! I really enjoyed the details and how it all worked!

Between the mystery of what was going on with the illness, and the bits of romance, and the politics of the dome, there was a lot going on. And then there was that ending, and that was so cliff-hangery, and shocking, and I want to know more!

This was a really great book, and I'd love to read more!