Week 11 Review: The Evil Within 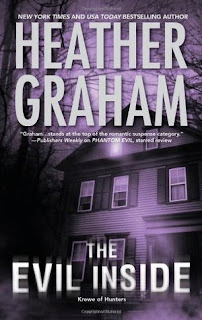 From Goodreads:
Some deaths live on forever

For as long as it has stood overlooking New England's jagged coastline, Lexington House has been the witness to madness-and murder. But in recent years the inexplicable malice that once tormented so many has lain as silent as its victims. Until now...

A member of the nation's foremost paranormal forensic team, Jenna Duffy has made a career out of investigating the inexplicable. Yet nothing could prepare her for the string of slayings once again plaguing Lexington House-or for the chief suspect, a boy barely old enough to drive, much less kill.

With the young man's life on the line, Jenna must team up with attorney Samuel Hall to pinpoint who-or what-is taking the lives of those who get too close to the past. But everything they learn brings them closer to the forces of evil stalking this tortured ground.

My Review:
I really enjoyed this book! It's the last book that I hadn't read before I started reading this series the first time, so yeah, I can finally get to the rereads, and then The Uninvited, which was the main reason I started from the beginning of the two series!

This is a the last book in a while for the first Krewe, the next few books are going to be around another group. So it was great to have this last time with some of the group members (Whitney was on her honeymoon, and Jake helped from a distance.)

Lexington House had a lot of horrors. And Jenna went through the first two. Not the latest, but the two that she saw were pretty horrible! And how they did affect the present, as well as the Salem Witch Trials.

Between the romance and the mystery, there was a lot going on! Really enjoyed what happened, and who the bad guys where! It was so awesome to read, and it was half expected, half unexpected, and yeah, just so enjoyable!

Such a great book, so enjoyable, and I can't wait to read more of the series!